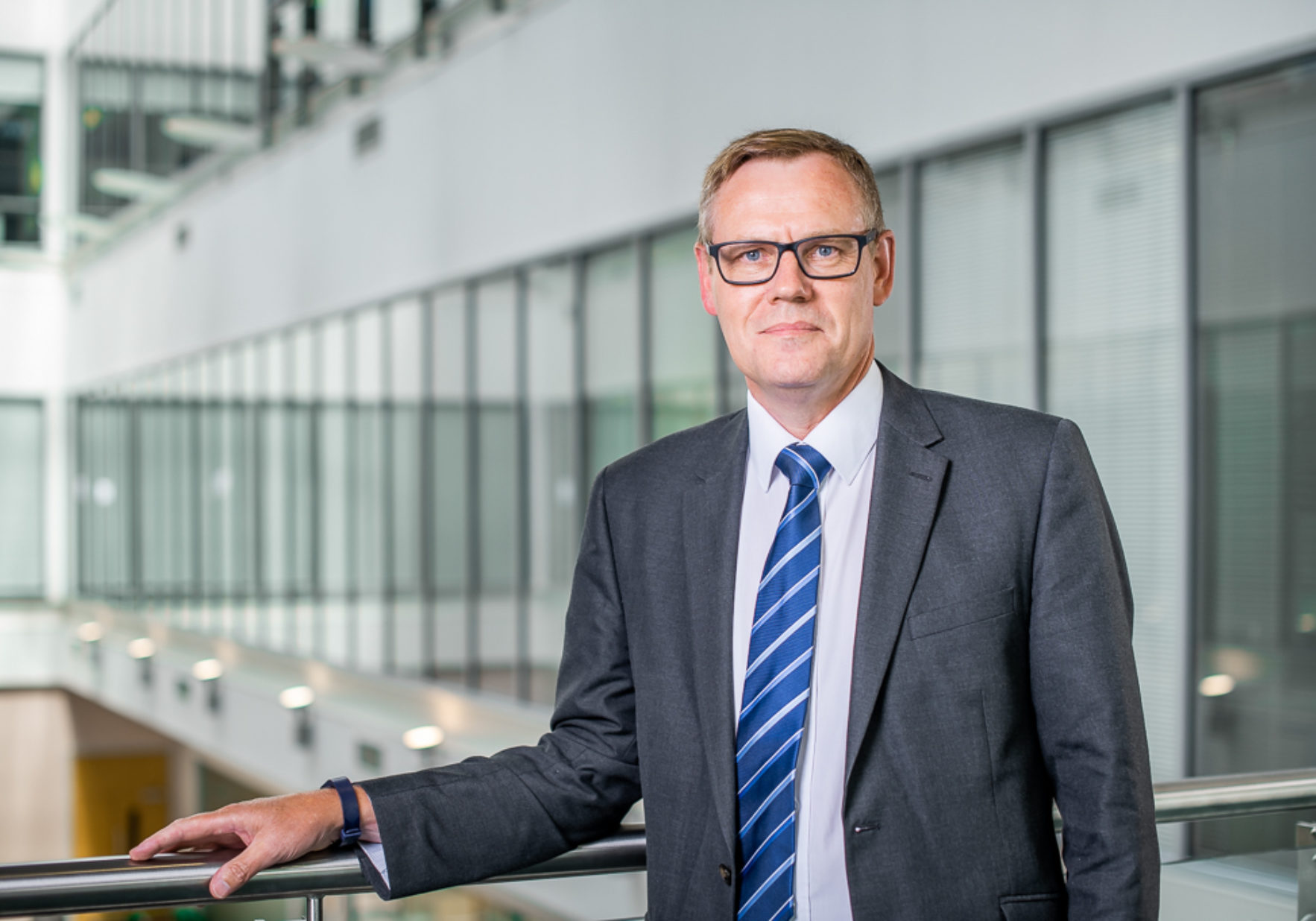 Prof Nigel Hooper is Chair in Cell Biology, Vice Dean for Research and Innovation and Director of Dementia Research at the University of Manchester. Obtaining his PhD in biochemistry from the University of Leeds in 1987, he was then awarded a Mr and Mrs John Jaffé Donation Research Fellowship from the Royal Society, rising to Dean of the Faculty of Biological Sciences in 2012. Joining the University of Manchester in 2014, Nigel has sat on a number of advisory boards to the Government and charity sector, became a Member of Academia Europaea in 2017 and was elected a Fellow of the Royal Society of Biology in 2016. As a UK DRI Momentum Award holder Nigel will lead an exciting programme of research using novel techniques, from bio-printing to nanoparticles, to investigate dementia.

The UK DRI is funding an ambitious programme of research at the University of Manchester (UoM) as part of our Momentum scheme. Six highly innovative projects will bring together expertise across the UoM and beyond, from neuroscience to engineering, biology and maths. Each project is outlined below:

1. Investigating the role of inflammation in dementia

A key defence in the body’s arsenal against disease is inflammation, which occurs as part of our natural immune response. ‘Inflammasomes’ (special protein complexes) sense danger and react, telling the immune system to kick in to action and causing inflammation that aims to eliminate the threat. New research in animals suggests that a particular type of inflammasome, NLRP3, found inside immune cells of the brain (microglia) may be crucial to the progression of neurodegenerative conditions such as Alzheimer’s disease (AD).

This project will seek to better understand the role of the inflammasome in disease, testing whether changing the inflammatory process has therapeutic benefit for dementia.

Key to dementia diagnosis is finding effective ‘biomarkers’ – ‘signature’ tests that indicate the presence/severity of disease in an individual. Current biomarkers include pathology observed in brain imaging and blood tests which look for certain proteins, however they sometimes miss signs of dementia (a ‘false negative’) or indicate disease when the person is well (a ‘false positive’).

This project aims to find new biomarkers in blood, using injections of ‘nano’ (tiny!) particles. Pathological proteins that arise during disease are absorbed onto the surface of these particles, which can then be extracted and analysed. Scientists subsequently investigate whether these proteins are good biomarker candidates for neurodegenerative disorders like AD.

Vascular cognitive impairment (VCI) is the second leading cause of dementia after AD, and is the result of damage to the brain’s blood supply. Small vessel disease (SVD) is the most common cause of damage to tiny blood vessels in the brain, and is often accompanied by harmful inflammation. As part of this inflammation there is a change in the structure of the brain tissue that supports cells, and scientists think a particular protein found within the structure, fibronectin, plays a key role.

Using mice, this project will investigate the role of SVD in VCI. Scientists will test whether an increase in fibronectin leads to inflammation of the brain tissue supporting cells, and ultimately, memory deficits like those seen in dementia. These deficits can be observed in mice in a variety of ways, for example, teaching them to navigate a maze and then seeing if they forget the route. If successful, this project could lead to treatments for VCI.

Crucial to the development of dementias including AD and Vascular dementia (VaD) is the vascular system, which supplies blood to the body and brain. In the brain, this system is complex, with five different cell types tightly packed together and all communicating with each other. Currently, we can research each of these cells individually by using stem cells – naïve cells which can be ‘programmed’ to grow into any type of cell. But to better understand the system, we need to be able to replicate it, with all five types of cells combined, in the lab.

This highly novel project will use state-of-the-art bioprinting to print a 3D model of this complex vascular system. Bioprinting uses special materials that can hold cells, and the printer will build the system layer by layer, in the lab. This means it will be possible to investigate, for example, how cells within the system communicate to each other, which will in turn leads to a better understanding of how changes in this system contribute to dementia.

5. Electrical stimulation to delay the onset of dementia

Our brains have an amazing ability to adapt and reorganise in response to damage. We call this ‘brain plasticity’, but there is evidence that this is impaired in diseases associated with dementia. Scientists have found that stimulating the brain using electrical currents can improve brain plasticity which may then slow the onset of dementia. However, research has produced mixed results. This is likely because the technology is fairly new, and so different techniques are being used, and the interaction between the electrical current and brain is not well understood.

This project will use mathematical modelling to create a ‘simulation’ of brain plasticity. By making changes to the simulation, researchers will be able to see what the effect of electrical stimulation would be in a real brain. This will enable them to create new guidelines for researchers using these techniques, and test theories of electrical stimulation effect on dementia.

6. Development of a mobile app to measure cognitive decline, and its link with inflammation

Inflammation – our body’s immune system’s response to danger – can contribute to dementia and worsen symptoms like poor memory and thinking skills i.e. cognition. However, there is currently no way to predict how inflammation in an individual may affect their cognition.

This project will develop a smartphone app that uses different tests to measure a person’s cognition, for example their memory, thinking skills, language, and ability to plan ahead. A large group of individuals with Mild Cognitive Impairment (MCI), in which people experience some of the same symptoms as Alzheimer’s disease and are at higher risk of going on to develop it, will be asked to use the app. They will also undergo tests for signs of inflammation. Researchers will then look at how their cognitive function changes over time, and how this relates to their level of inflammation. It is hoped that this will lead to new discoveries for treatments - anti-inflammatory drugs may improve cognition.

The immune system is thought to be a driver of cognitive decline in dementia. Latest research suggests that regulation of a multi-protein inflammatory complex, the NLRP3 inflammasome, is linked to microglial activation and phenotype. Manipulating this pathway using NLRP3 inhibitors, or interleukin (IL)-33 binding to ST2, markedly improves cognition in animal models of dementia, suggesting therapeutic opportunities. However, regulation of NLPR3 and the role of microglia in neuronal function is not fully understood.

This project aims to understand inflammatory networks that regulate microglial activity and discover new molecular mechanisms that contribute to cognitive decline. Involving the Manchester Collaborative Centre for Inflammation Research (MCCIR), researchers will investigate the interaction between IL-33, NLRP3 and microglia.

There are currently no reliable biomarkers for dementia. Testing for levels of proteins in plasma suggest promising results, but current methods are limited by the need to collect a blood sample. This project will use a novel approach to test for protein biomarkers of dementia in vivo, using nanoparticles. Dispersing nanoparticles in biofluid causes layers of proteins to be absorbed on their surface, forming a complex bioshell known as ‘protein corona’. Researchers at the UoM have, for the first time, been able to retrieve nanoparticles circulating in mice and characterise the protein corona.

This project aims to extract potential blood biomarkers from AD model mice, analysing the protein corona of nanoparticles of different composition, and with different surface characteristics. Involving the National Graphene Institute, it is hoped results will lead to further research in early detection of dementia.

Vascular cognitive impairment (VCI) represents the second leading cause of dementia after AD, and at present there are no symptomatic treatments or molecular targets. The most common pathology underlying VCI is small vessel disease (SVD), characterised by changes in the brain microvasculature, alongside a neuroinflammatory response. Key to this inflammation is remodelling of the extracellular matrix (ECM), the structure that supports cells. This remodelling is characterised by increased fibronectin (FN), a glycoprotein that binds to other proteins in the ECM.

This project will investigate the involvement of ECM in SVD, using an atherosclerotic mouse model to test whether increasing FN shifts cerebral endothelial cells to a pro-inflammatory state, and subsequent cognitive decline. Combining world-leading expertise from the Wellcome Trust Centre for Cell-Matrix Research and UoM, future research will look to identify drug targets.

The importance of the vascular system to the development of multiple dementias, including Alzheimer’s disease (AD) and Vascular dementia (VaD), has recently been highlighted. In the brain, cerebrovascular and neuronal structures are tightly integrated, forming the multicellular neurovascular unit (NVU), comprised of five different cell types: endothelial cells, pericytes, astrocytes, microglia and neurons. Targeting this neuro-vascular interface is key to understanding the pathology of dementia. Induced pluripotent stem cells (iPSCs) can be used to model cell types making up the NVU, allowing dissection of their contribution to neurodegeneration, but precisely modelling five cell types using conventional methods is extremely difficult.

This project will employ state-of-the-art 3D Bioprinters to build an in vitro NVU cell model, using hydrogel-based materials to produce 3D matrices, layer by layer. Capable of recapitulating the biomechanical environment of the NVU, matrices will have precise spatial organisation, be highly accurate and reproducible. This novel technology will be used to dissect cell-cell communications within the NVU, in order to address the mechanisms underlying dementia. Further research will look to apply dementia patient-specific iPSC-derived neurovascular cells to the model to identify disease phenotypes and conduct drug screening for future treatment.

Impaired brain plasticity – its ability to adapt and reorganise in response to change – plays a role in the development of dementia. There is emerging evidence that electrical brain stimulation such as Transcranial Magnetic Stimulation (TMS) may enhance brain plasticity, suggesting a possible route to slowing the onset of dementia. However, research has produced mixed results, likely due in part to the wide range of techniques being employed in this new field. The interaction between electrical stimulation and neural circuits is not well understood, and a more principled approach would lead to more stable research outcomes.

This project will mathematically model neuroplasticity, incorporating the effect of electrical stimulation. Models will be verified using neuroimaging, and then used to design optimal electrical stimulation protocols for use in dementia, generating hypotheses which can be tested in clinical trials.

The overall aim of this project will be to develop and validate a smartphone-based battery of cognitive function tests, sufficiently convenient to be used frequently by large numbers of people. A cohort of patients with Mild Cognitive Impairment (MCI) or prodromal AD will be recruited from the Manchester Academic Health Science Centre, and undergo inflammatory protein screening using proteomics. Researchers will then test for correlations between inflammation and cognitive function results from the smartphone tests, looking for changes over time. Future research will enable investigation of the effects of anti-inflammatory drugs on cognitive decline, lead to a more ‘personalised medicine’ approach, and provide a tool for early detection of dementia.