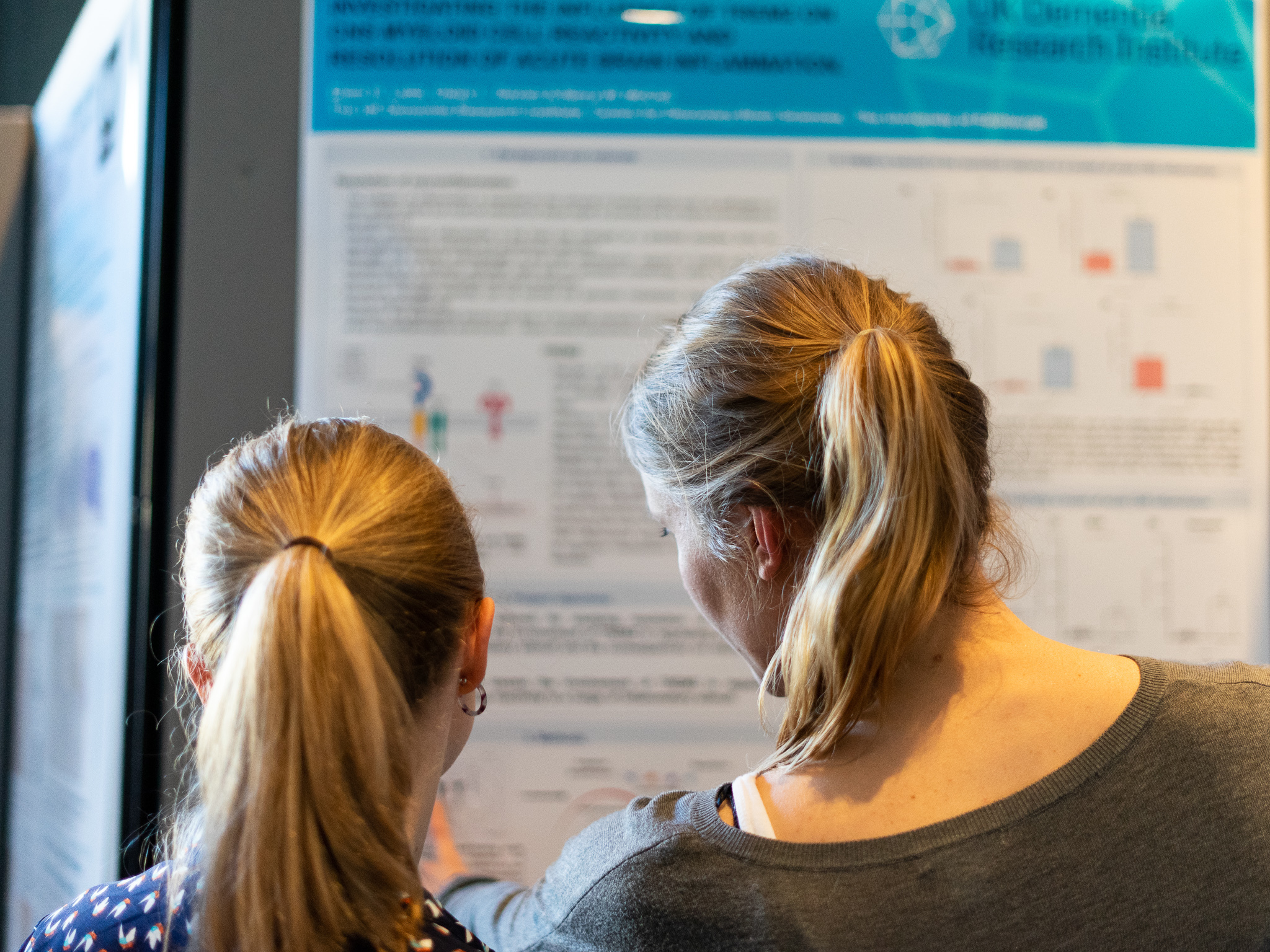 In the first focussed ‘Theme’ event for the UK DRI, early-career researchers (ECRs) from across the network joined together last month (10-11 April 19) to share knowledge and insight on the topic of neuroinflammation (NI) in a 2-day workshop.

At the UK DRI, we have already identified and started to address a number of research areas that will benefit from cross centre collaboration. Each brings multidisciplinary expertise from across UK DRI Centres to explore crucial questions, develop new technologies, explore experimental/therapeutic approaches, and share and make better use of data and analytics. This 2-day workshop, involving over 40 group leaders and ECRs aimed to strengthen interactions and identify suitable ideas for collaborative projects going forward.

Increasing evidence points to neuroinflammation as a key factor contributing to the pathogenesis of dementia. Under the umbrella of the NI Theme, group members build on existing UK DRI expertise to investigate emerging aspects of neurodegeneration involving the role of immune cells and pathways including: 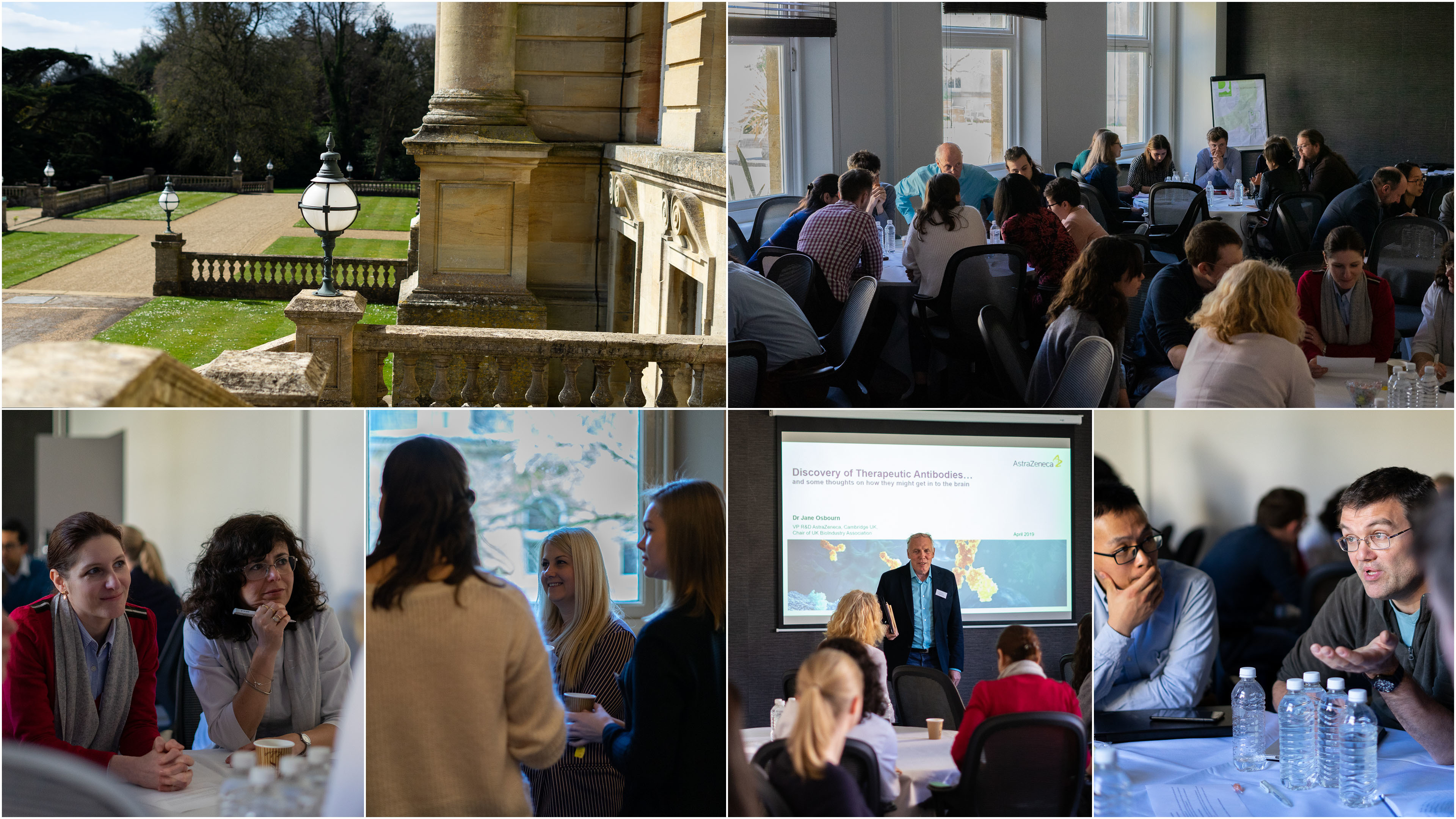 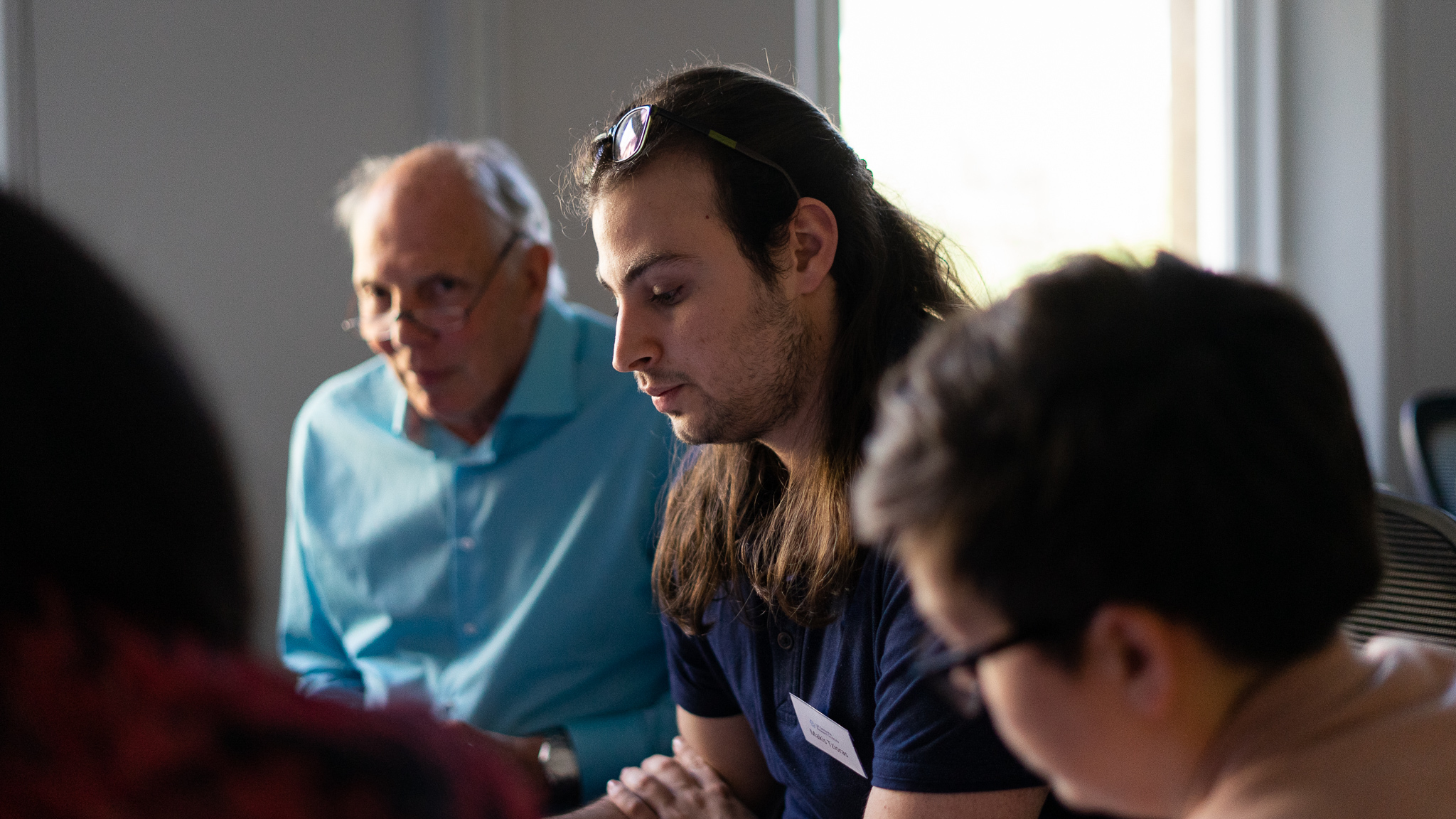 “With the ECR neuroinflammation workshop, the UK DRI has proven once more that it truly has the best intentions for promoting scientists in the early stages of their careers. As a PhD student, it feels great to be given the opportunity to share our work in a collaborative environment and encouraged to speak our minds. The line-up of speakers was very diverse, including ECRs of different career stages and experienced group leaders, which was great for learning all about the work happening across the UK DRI centres and setting-up new collaborations. Of course, I must mention how excited I was to meet Soyon Hong, who has paved the way for work on microglia and synapse loss in Alzheimer’s disease, and who provided constructive feedback to make our work even better.

Furthermore, I believe the UK DRI fosters a supportive atmosphere for ECRs to express our opinions, even when they are not shared unanimously. At the end of the day, coming up with new ideas and testing them out is what science is all about! An example of this was the roundtable discussion at the end of the workshop where in small groups, we discussed how the UK DRI can help us as scientists, but equally important, as people. There is a clear shift in academics being perceived as more than just their publications; they are now praised for their role as mentors, advocates, and allies. I am delighted to see the UK DRI on-board with this new idea that is changing how ECRs are treated and making science more inclusive. This workshop was an amazing experience and I would highly recommend it to be applied in all other themes across the UK DRI.” 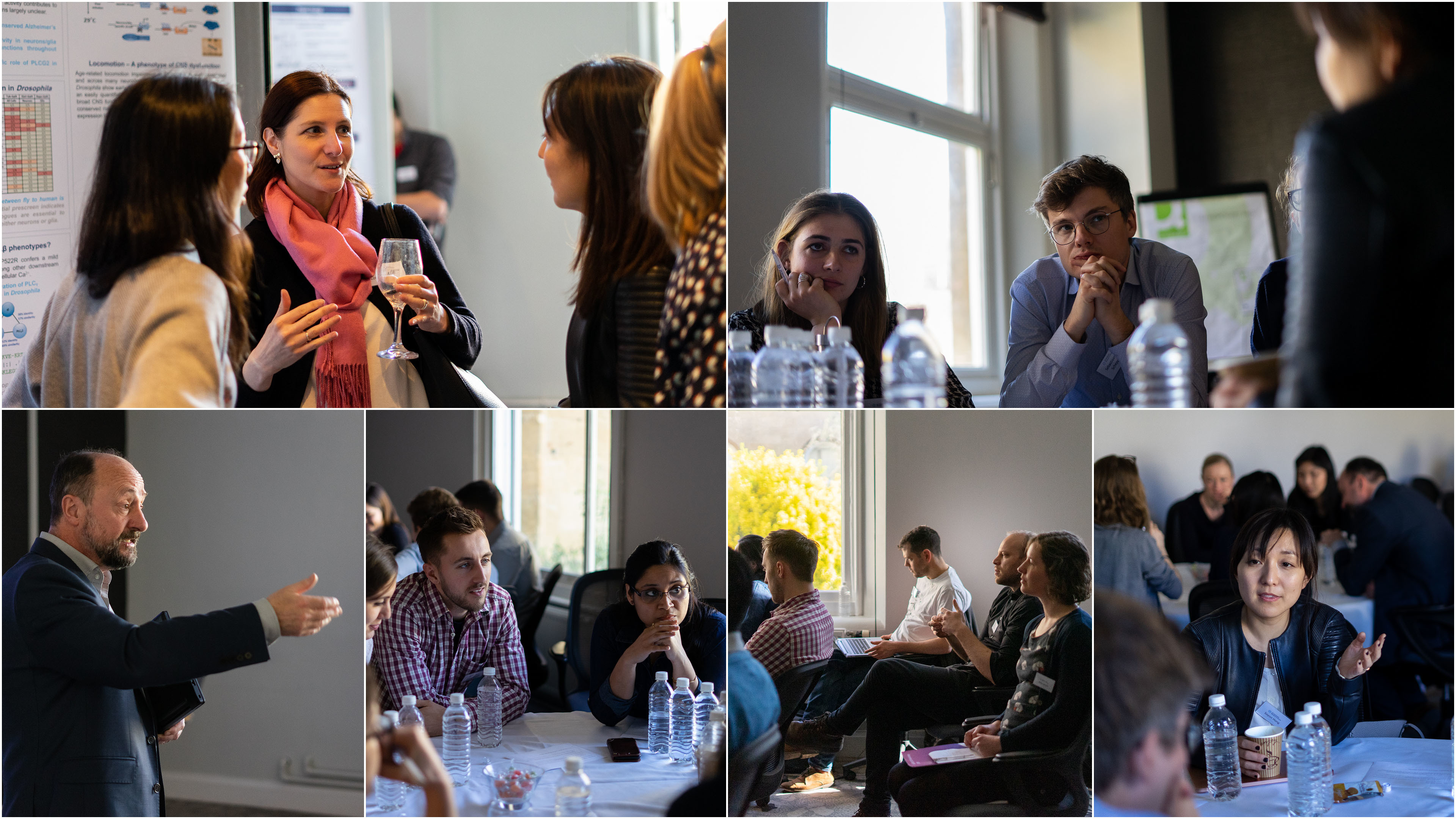 Looking to the future

Overall, we are delighted that feedback from the ECR workshop on neuroinflammation, and our first themed event, has been extremely positive. As the ECRs develop in their UK DRI programmes, we hope that the themed groups provide a strong network for collaboration and aid the sharing of expertise and knowledge across the institute.

At the UK DRI, we are committed to supporting theme-led initiatives. Our ability to regularly assemble complementary research interests, skills, tools and expertise from across the centres will be a particular strength of the UK DRI.

To be successful, the members of the themes must have the capacity to meet frequently, explore new opportunities, perform pilot work, and design collaborative experiments. We will provide financial support to ensure that the cross-centre research themes develop fully and are neither an afterthought nor put aside because of lack of resources. Flexible budgets will be put in place and could cover a variety of needs including shared ‘theme-wide’ post docs, meetings and workshops, reagent for sharing, support for grant preparation, etc. We encourage our researchers to approach HQ with ideas and proposals. 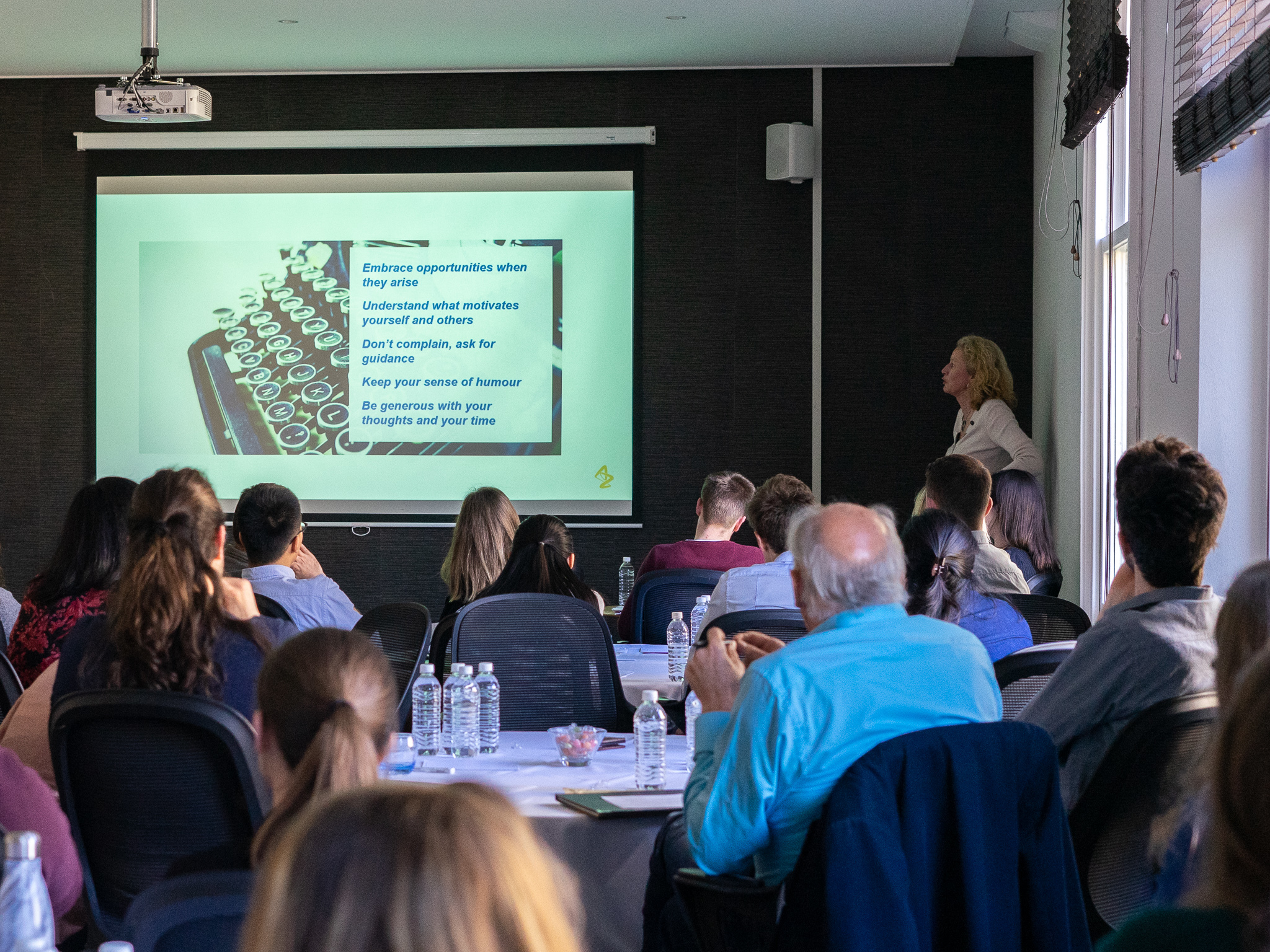 Delegates were welcomed to the workshop by Theme lead, Prof Hugh Perry, a world leading expert on the role of neuroinflammation in neurodegenerative diseases. Hugh encouraged attendees to embrace this opportunity to interact with peers and outlined support available from the UK DRI to ‘turn talk into action’.

Coming from a research background that has focussed heavily on amyloid beta for over 20 years, UK DRI Director, Prof Bart De Strooper, opened his talk with a reluctant admission that he ‘never wanted to work on microglia, but the genetics pushed him that way.’ Bart continued on to outline his group’s work on the expression of risk genes for Alzheimer’s disease (AD) within a selection of transgenic models, concluding that a large part of overall risk for Alzheimer’s disease manifests itself in the genetic make-up of microglia. How microglia respond to amyloid beta deposition could be an important aspect to explore, particularly using microglia derived from patients with high polygenic risk scores for AD.

The workshop comprised of several topic sessions, with an overview delivered by a UK DRI group leader before a series of talks from ECRs. Prof Phil Taylor, UK DRI at Cardiff, kicked off ‘Tissue Macrophage Heterogeneity’ by reminding attendees that immune cells exist outside of the central nervous system, quipping that ‘people think microglia are special, but really they are just macrophages’. Making the case that traditional macrophage (and therefore microglial) classification is outdated, Phil described the diverse phenotypes adopted by these cells, largely influenced by the microenvironment around them.

In the following ECR talks, Lorenza Magno, Drug Discovery Institute (DDI) at UCL and Thomas Phillips, UK DRI at Cardiff, discussed work investigating a protective variant of the microglial gene, PLCG2. Georgina Menzies, also UK DRI at Cardiff, and Emma Mead from the DDI at Oxford, outlined their research on the heavily implicated microglial receptor TREM-2. Georgina explained how molecular simulations can aid our structural understanding of the receptor when mutated, while Emma described how she is aiming to identify tools that maintain TREM-2 stability and function.

Prof Caleb Webber, UK DRI at Cardiff, introduced the second session topic of the day and an area of high interest for many researchers at the institute – ‘Single Cell Transcriptomics’. While bulk transcriptomics on multiple cells is a relatively quick and low-cost method, the information gleaned can lack vital details. In contrast, single cell transcriptomics limits researchers in the number of cells assessed, but the detail is far greater and may reveal the subtle and important differences within a heterogeneous population. In keeping with the spirit of the ECR event, Caleb peppered his talk with useful tips and warnings, cautioning that all sorts of organic material can be sequenced - including dandruff of an unsuspecting researcher.

Disease is a process - study it as a process Prof Caleb Webber, UK DRI at Cardiff

The day concluded with a poster blitz and drinks reception, before attendees got a chance to relax and get to know each other better at the evening dinner. 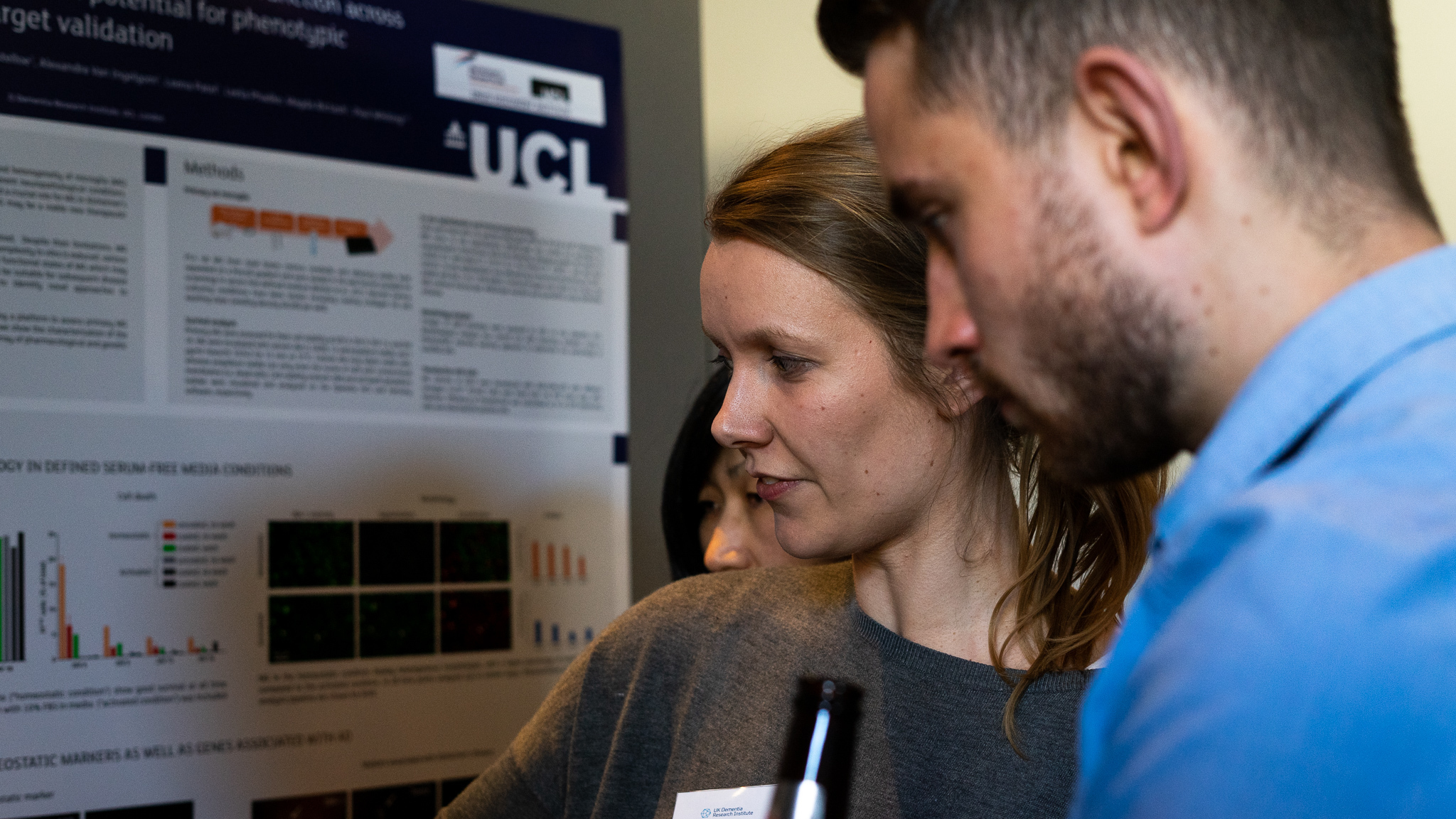 The second day started with UK DRI Fellow at UCL, Dr Soyon Hong, introducing the morning session on ‘Microglia Biology.’ Soyon has extensive experience in this field, having worked in one of the first labs to identify this cell type as a critical player in synaptic pathology - largely executed through components of the complement system.

Two ECRs from UK DRI at Cardiff outlined their projects which drill into the molecular aspects of microglial biology. Sarah Carpanini discussed how she is isolating synaptoneurosomes to explore the role of complement, while Elena Simonazzi is assessing the contribution of ABI3 - its S209F variant being a risk factor for Alzheimer’s disease. Dimitrios Sideris, UK DRI at Cambridge, took attendees through a new method developed to extract amyloid beta oligomers from human brain for analysis and use in vitro.

A key goal for the UK DRI is translation of research findings into viable therapeutics. Therefore, collaboration with colleagues in industry and at units such as the Drug Discovery Institutes (DDI) will be critical to realise this aim. Juliane Obst, DDI at Oxford, concluded the session on microglia by describing her work to understand the role of TREM-2-associated pathways in this cell type, with the overall aim to identify druggable targets.

Dr Sam Barnes, UK DRI Fellow at Imperial, introduced the ‘Inflammation and Neuronal Communication’ session, demonstrating the value in holding these collaborative events - although Sam’s research is centred on synapses and homeostatic plasticity, he has identified a critical inflammatory component and hoped to receive advice and expertise from researchers in this field. Although presenting a complex topic, Sam delivered an accessible and enjoyable talk, describing his aims to explore dendritic spine activity in addition to structural changes.

If you measure all the landmarks in London, the structure won’t inform you about what they do Dr Sam Barnes, UK DRI at Imperial

Building on previous talks, Megan Torvell, UK DRI at Cardiff, outlined her plans to create animal models lacking in specific components of the complement system to increase understanding of its role in neurodegeneration. Dawn Lau, DDI at UCL, explained how she has been developing a platform for drug developing using primary microglia, while Bing Li, UK DRI at Cambridge, showcased some exciting preliminary work from a cutting-edge microscope and molecule delivery system he has developed. The final science talk of the event, delivered by Freya Storer, UK DRI at Cardiff, showed the value of alternative animal models, such as Drosophila, in studying the role of microglia in neurodegeneration.

The final two sessions of the day focussed on career development for the ECRs in attendance. Firstly, Dr Jane Osbourn, Vice-President of Research and Development at Medimmune, gave an enlightening talk on her career journey in antibody therapeutics, at a time when the field was going through major development and evolution. Jane outlined the advantages of function-based drug screening and described her role in the impressive construction of vast antibody libraries, as well as her company’s quirk to name promising drug candidates after premier league footballers.

Finally, the ECRs gathered in small groups to discuss what fundamental questions still remain in the neuroinflammation field and various aspects of their own development as researchers. Many expressed a greater understanding of the role of microglia was needed, particularly the balance between pro- and anti-inflammatory states. Thinking more broadly, the ECRs would like to see progress made in bridging the gap between basic and clinical research – it was noted that it is difficult for clinicians to find opportunities to carry out research projects.

With regard to career development, the ECRs indicated that small grants would be helpful for pilot projects and the introduction of mentorship initiatives, perhaps involving groups leaders from other centres. There was a consensus that collaborative events, such as this workshop, were a great way to meet and network with other researchers from across the institute. 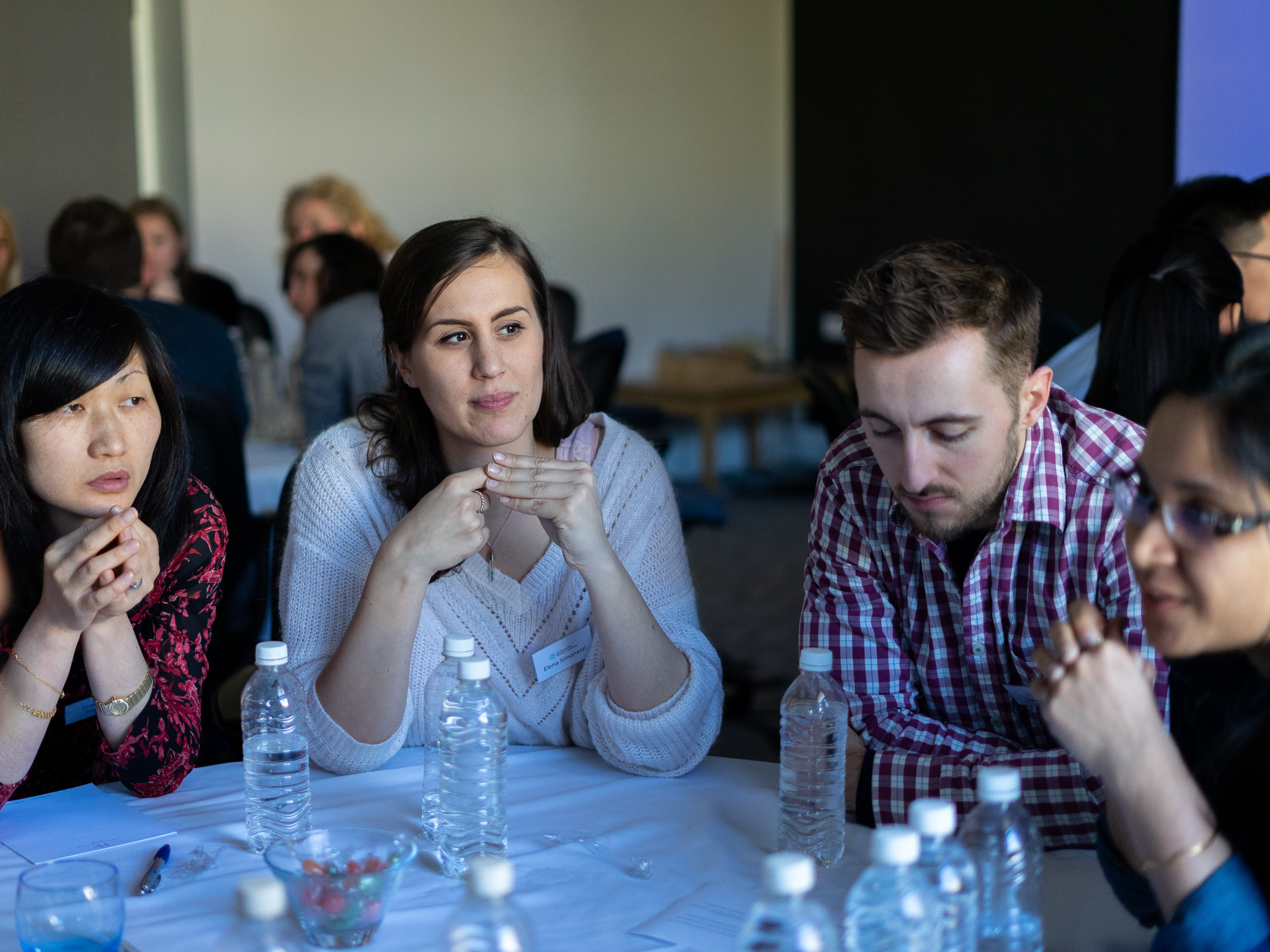