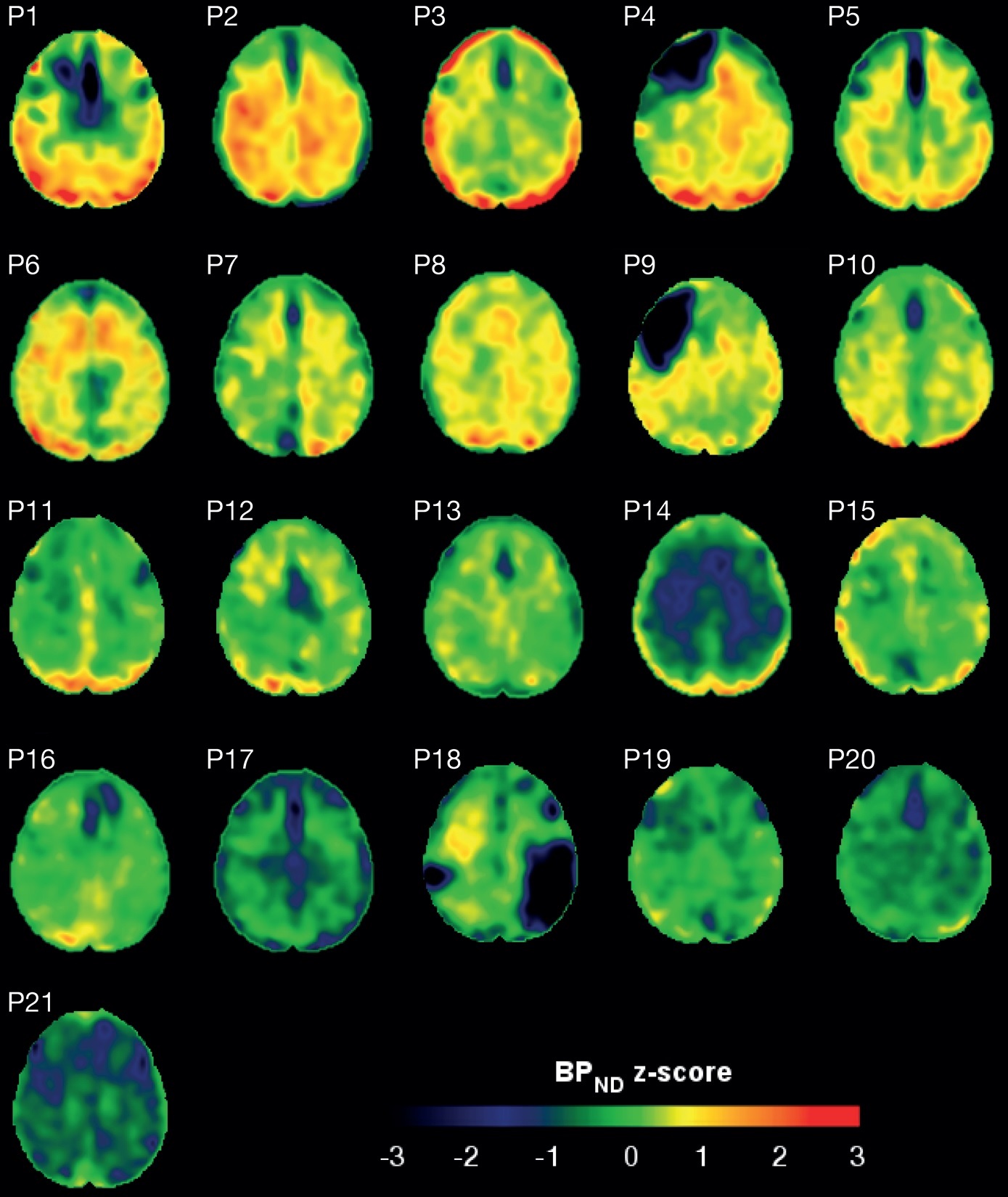 For the first time, researchers led by Prof David Sharp, Associate Director of UK DRI Care Research & Technology at Imperial, have visualised ‘tangles’ of a protein associated with dementia in the brains of people who have suffered a single head injury.

Published today (4 Sept) in Science Translational Medicine, this early-stage study recruited 21 patients from the Institute of Health and Wellbeing at the University of Glasgow and from Imperial College Healthcare NHS Trust. This cohort included those who had suffered a moderate to severe head injury at least 18 years earlier (mostly from traffic accidents), as well as 11 additional healthy individuals who had not experienced a head injury. The findings showed that some of these patients had clumps of protein in their brain called tau tangles.

Tau normally helps provide structural support to nerve cells in the brain – acting as a type of scaffolding, but when brain cells become damaged – for instance during a head injury, the protein may form clumps, or tangles. Tau tangles are found in Alzheimer’s disease and other forms of dementia, and associated with progressive nerve damage.

The team, which includes collaboration between UK DRI centres at Imperial and UCL, say the research may accelerate the development of treatments that break down tau tangles, by enabling medics to monitor the amount of the protein.

Scientists have known for some time that repeated head injury – such as those sustained in sports such as boxing, rugby and American Football - can lead to neurodegeneration and dementia in later life – with particularly strong links to a type of brain condition called chronic traumatic encephalopathy. However, this is the first time scientists have seen the protein tangles in living patients who have suffered a single, severe head injury, explains Dr Nikos Gorgoraptis, author of the paper from Imperial’s Department of Brain Sciences.

“Scientists increasingly realise that head injuries have a lasting legacy in the brain – and can continue to cause damage decades after the initial injury. However, up until now most of the research has focussed on the people who have sustained multiple head injuries, such as boxers and American Football players. This is the first time we have seen in these protein tangles in patients who have sustained a single head injury.”

Dr Gorgoraptis adds that although these tangles have been detected in the brains of patients in post-mortem examination – where findings suggest around one in three patients with a single head injury develop protein tangles - they have not before been seen in the brains of living patients.

“The study used a type of brain scan, called a PET scan, combined with a substance that binds to tau protein, called flortaucipir, to study the amount of tau protein in the brains of head injury patients. The results revealed that, collectively, patients with head injury were more likely to have tau tangles. The paper also showed that patients with tau tangles had higher levels of nerve damage, particular in the white matter of the brain. None of the healthy individuals had tau tangles.”

Interestingly, the results revealed patients with higher levels of tau tangles did not necessarily have any reduction in brain function, such as memory problems, compared to patients with fewer tangles. However, Dr Gorgoraptis adds these tangles can develop years before a person starts to develop symptoms such as memory loss. He explained there are still many questions to answer about the tau tangles and brain damage.

“This research adds a further piece in the puzzle of head injury and the risk of neurodegeneration. Not all patients with head injury develop these protein tangles, and some patients can have them for many years without developing symptoms. While we know tau tangles are associated with Alzheimer’s and other forms of dementia, we are only beginning to understand how brain trauma might lead to their formation. What is exciting about this study is this is the first step towards a scan that can give a clear indication of how much tau is in the brain, and where it is located. As treatments develop over the coming years that might target tau tangles, these scans will help doctors select the patients who may benefit and monitor the effectiveness of these treatments.”