MP visit to UK DRI: Highlighting the importance of dementia research to the UK 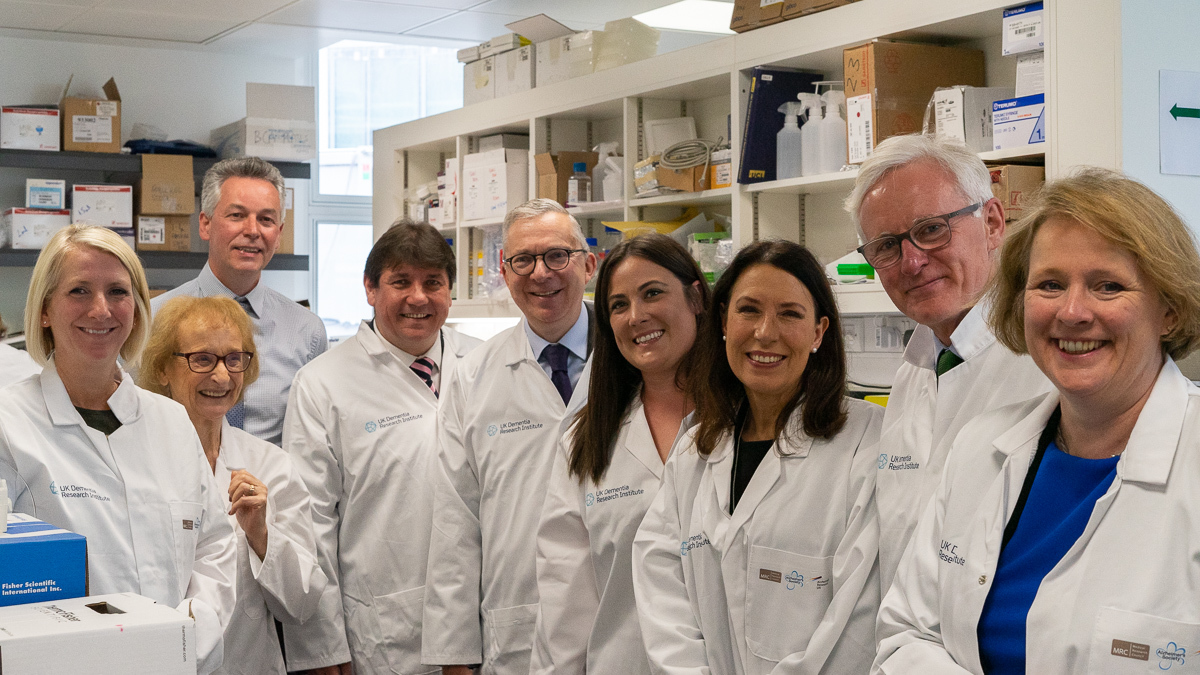 We were delighted to welcome a group of MPs to the UK DRI labs at UCL today, to discuss the significant impact of dementia to our society and the ground-breaking research seeking to change that.

Guests included Debbie Abrahams MP and Baroness Sally Greengross, Co-chairs of the All-Party Parliamentary Group on Dementia (APPG) - a cross party group made up of MPs and Peers with an interest in dementia. Members of the Common’s Science and Technology Committee; Norman Lamb MP, Vicky Ford MP and Stephen Metcalfe MP also joined us. The guests were welcomed by UK DRI Director and COO, Adrian Ivinson and representatives from our charity funders, Alzheimer’s Society (AS) and Alzheimer’s Research UK (ARUK).

Jeremy Hughes, AS CEO, and Helen Davies, ARUK Head of Public Affairs, began the meeting by describing the scale of the dementia problem in the UK and what was currently being done to tackle this. One recent development has been an increase in public awareness of dementia-related conditions, aided by public engagement activities such as the Dementia Revolution – Charity of the Year for the 2019 Virgin Money London Marathon and a joint campaign run by AS and ARUK.

Next, Carli Pirie (below), a Dementia Revolution marathon runner, spoke passionately to the assembled members about her experiences of dementia, with a genetic form of Alzheimer’s disease present in her family. Adrian Ivinson concluded the meeting by outlining the main challenges in seeking effective treatments, the vision of the UK DRI and why more funding was needed to bridge the knowledge gaps in our understanding of the brain. 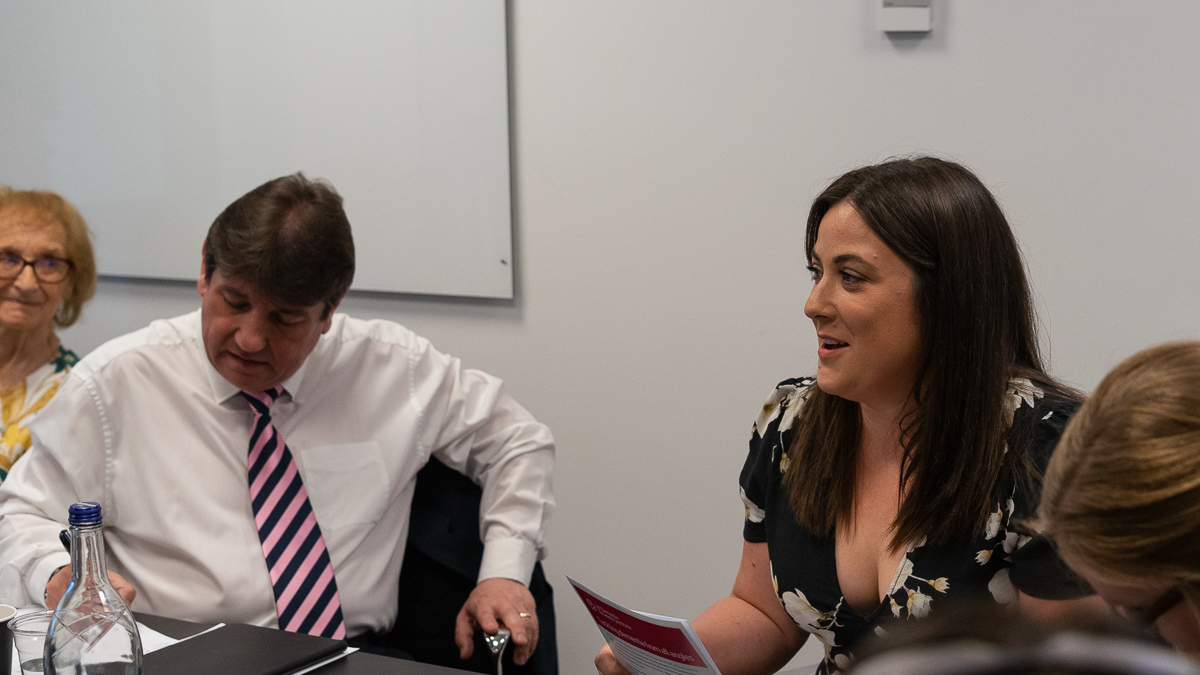 The MPs had the opportunity to ask questions on dementia and its impact on our economy during a lively discussion.

The visit culminated with a tour around the newly refurbished UK DRI labs at UCL, where the MPs saw new kit, our researchers working and heard about the exciting approaches being taken to discover more about the causes of these devastating conditions. 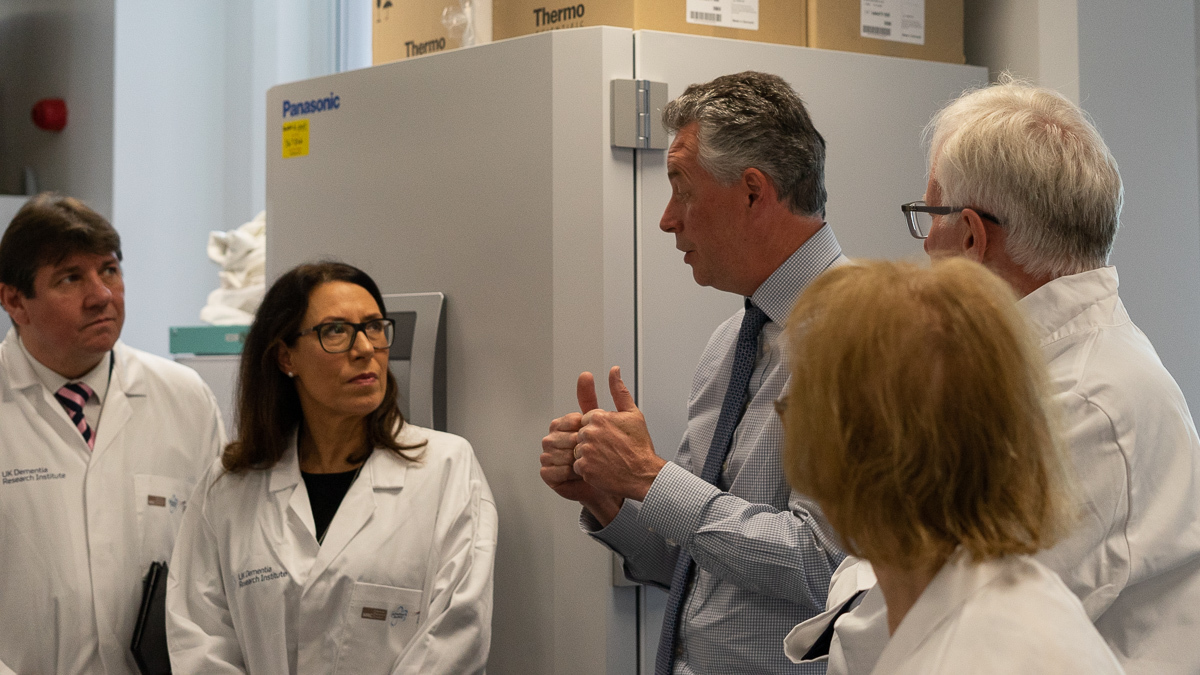 At the UK DRI, we are keen to continue making sure dementia research funding is high on the political agenda and look forward to more discussions with decision makers in the future. Following the visit, Vicky Ford MP addressed the House of Commons (video below 31:25), speaking of her visit to the UK DRI, promoting the Dementia Revolution Campaign and asking the government whether they would continue to support dementia research.

There will be cures, but only if the world continues to invest in the research Vicky Ford MP

Vicky Ford MP went on to speak about her visit to the UK DRI during a debate on social care, highlighting that 850K people in the UK suffer from dementia, costing the country £26 billion annually - a figure that is only set to rise in future years. Ford additionally put a spotlight on the current knowledge and funding gap when compared to other areas such as cancer, and emphasised the need for investment to maintain the UK's status as a world leader in dementia research.