Running for the Dementia Revolution 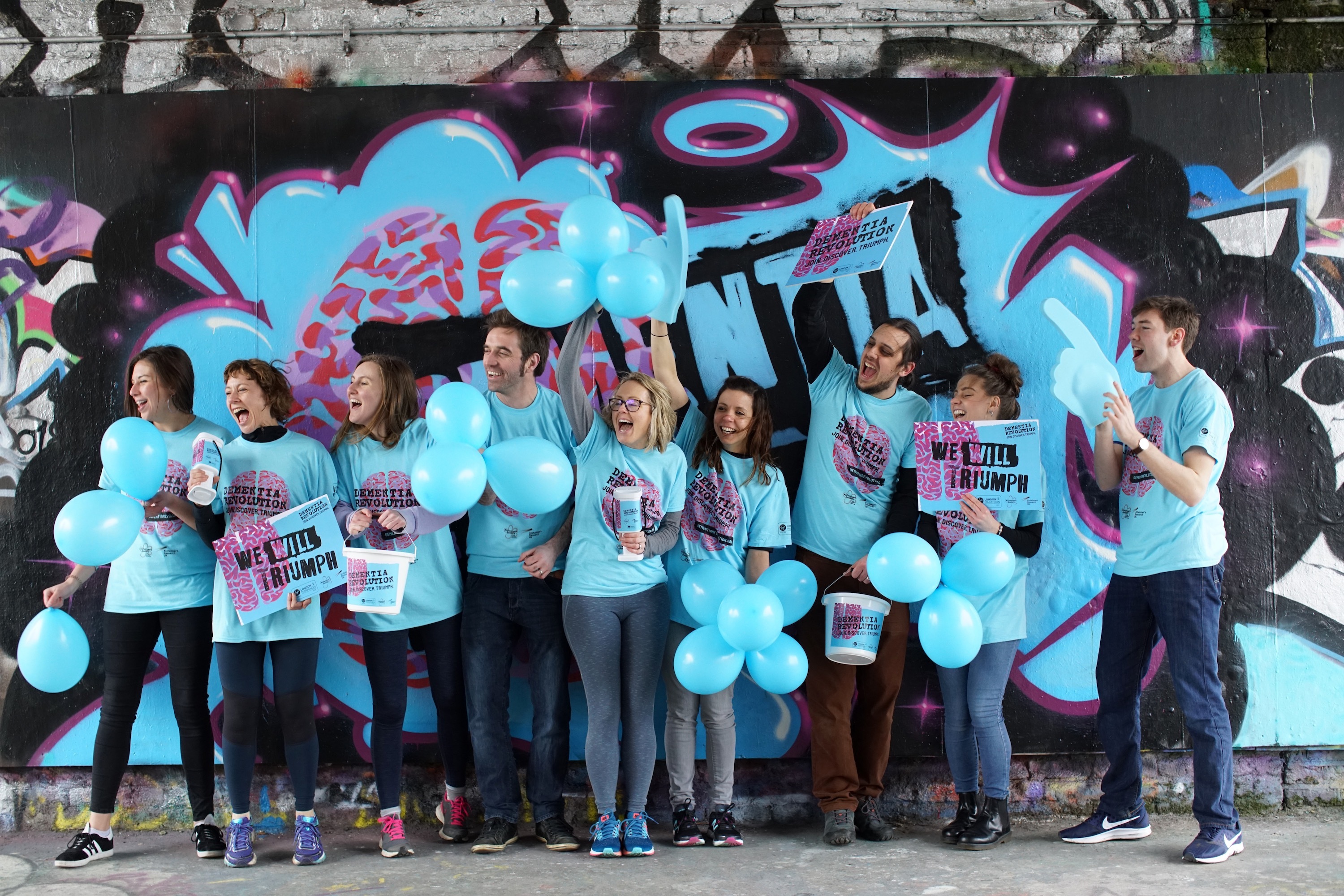 This Sunday, thousands of marathon runners will be pounding the streets of London, raising vital money for charities across the UK. Many will be powering ground-breaking dementia research by fundraising for the UK Dementia Research Institute (UK DRI) through the Dementia Revolution campaign. The UK DRI is the single biggest investment in dementia research ever launched in the UK, set up by the MRC and charity founders Alzheimer’s Society and Alzheimer’s Research UK. Here, two runners with a very special connection to tackling dementia tell their story about what research means to them. 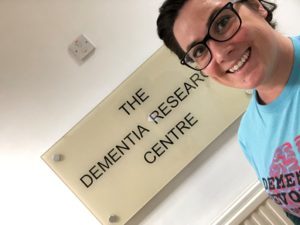 I started taking part in research because my family have a genetic mutation that results in early-onset Alzheimer’s disease. We lost my nan very young and then started noticing signs in my mum.

When she was being diagnosed, I felt a little helpless and like I was out of control, so I signed up to the Dominantly Inherited Alzheimer’s Network (DIAN) study. I felt that by taking part, I could give something towards the future.

For the study, I have samples taken every year, plus memory tests, cognitive tests and MRI scans. Then every few years I also donate spinal fluid. I’ll be in it for as long as I can be. I’ve got a 50% chance of having the genetic mutation, and if I have it then so will my daughter. This research means so much to me, as I want to help towards finding a cure or a preventative treatment so that my daughter doesn’t have to go through the things that we’ve gone through as a family. 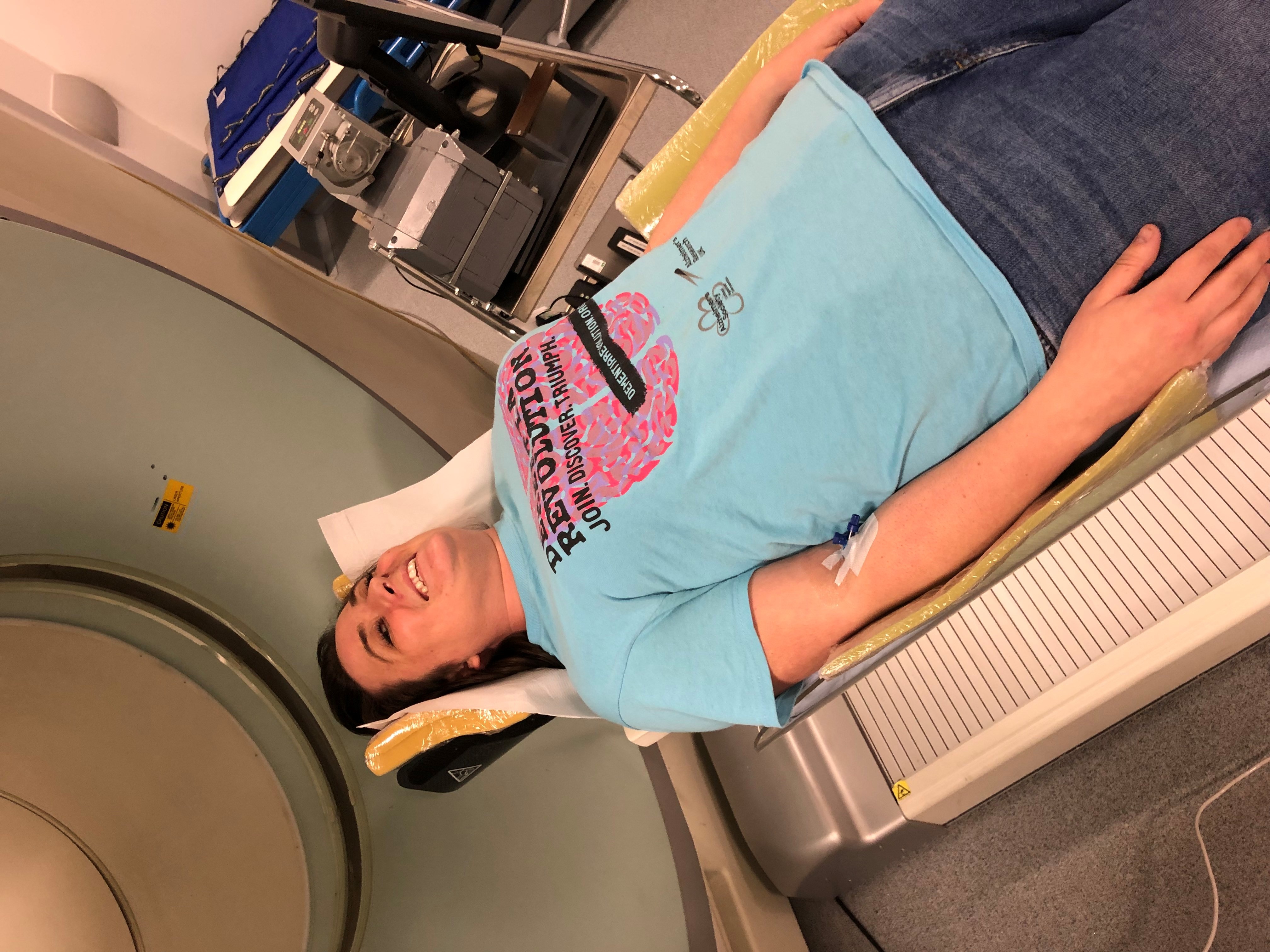 I’ve never run a marathon before. When I turned 30 – 20 years away from the age that early-onset Alzheimer’s disease has affected our family – I made a list of 20 things to do before I’m 50. On that list was to run a five or 10km race.

Then I found out that the Dementia Revolution was the official charity for this year’s London Marathon and that the money raised is going towards the UK DRI. That’s where my heart lays, with research, so I decided to go for it. I see where the money goes, I know what it does, I know what work goes into everything. 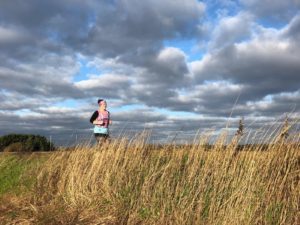 At our first Dementia Revolution meeting, I was sitting next to Amanda, who told me she’s tracking bio-markers in the study. I don’t know who was more starstruck, her or me. She’d never met anybody that donates their spinal fluid before. Ever since that day we’ve been in contact. We’ve found a friend within each other.

I’m not a runner and have struggled during my training for the race but I know I can do it. I’m quite a determined person, and as soon as I’ve signed up for something that’s it, it’ll happen. 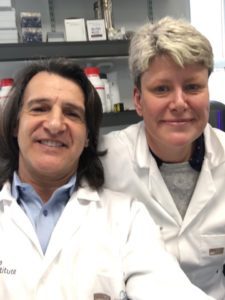 Amanda with Scott Mitchell, Barbara Windsor’s husband, who visited the lab with the BBC recently.

In the fluid biomarker lab, my team curates the UK DRI biobank. We take in, process, and biobank all the biological samples that come in and do a lot of sample analysis.

I first heard that the Dementia Revolution was the charity for the London marathon from Adrian, one of my co-PIs here. He said, “they’re looking for runners to run for the UK DRI, you run, don’t you?”. I don’t run marathons every week anymore, but I used to, and I still run a lot.

Sitting next to Carli at the meeting, she asked if I thought I’d handled some of her spinal fluid. It was only a few weeks before that I was measuring samples from the DIAN study, and I realised that I probably had. That was a really nice moment.

Now, when I’m doing something in the lab, I’ll think about how they aren’t just numbers on a spreadsheet, they’re people. And some of them are involved in this research not because it will help them but because it may help their kids. It’s a sobering thought. It makes you think we’re involved in something good. 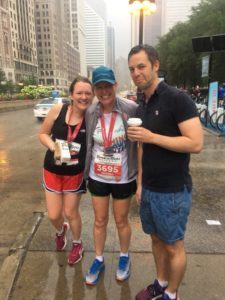 I’ve run the London Marathon six times before and have always raced for a good time. But this year I’m running it for something I believe in, and even more so having met Carli and her family.

I’m looking forward to the day and I hope that perhaps I’ll be able to run with her. There are 10 cheer points throughout the marathon route, where there will be Dementia Revolution supporters making lots of noise. I aim to walk through all of these to fully enjoy their support.

I know how important the research that we do is. And at the UK DRI we’re proving that putting researchers together, in such a great collaborative environment, makes research more productive. It’s special – no one’s had such a big vision for dementia research before. That’s why the funds are so essential. To make sure we make the most of it.

For further information and to donate to the Dementia Revolution, visit www.dementiarevolution.org