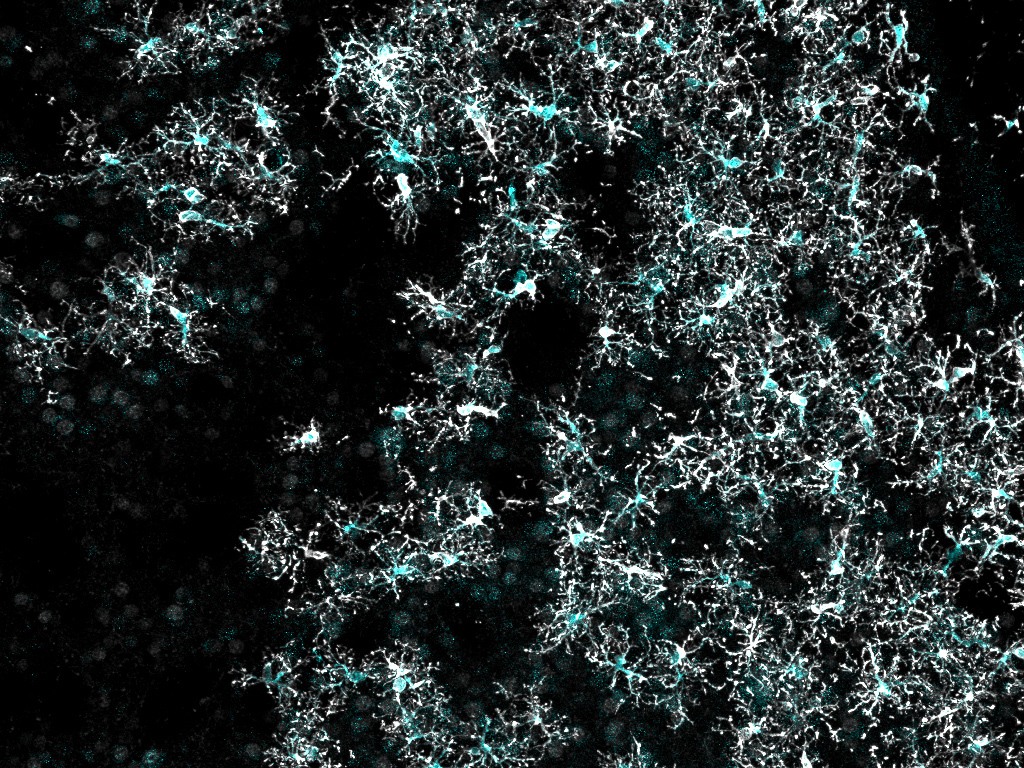 A new article from the lab of Prof Bart De Strooper in VIB Leuven has outlined a protocol to transplant human microglia into the mouse brain. Published today in Nature Neuroscience, the authors say this development will facilitate studies that more accurately reflect human conditions.

Despite the recent wealth of human genetics data we have acquired for neurodegenerative disease, one issue still remains when researchers attempt to explore the impact of risk genes in the lab; a significant number of human genes lack an equivalent in mouse. To tackle this problem, the group at VIB Leuven pre-treated mouse neonates with CSFR1 inhibitor to remove approximately half of endogenous microglia, before engrafting human microglia derived from embryonic stem cells into the brain to create a chimeric model. The human microglia integrated into several brain regions, forming a mosaic distribution and displaying a homeostatic signature similar to that of cells isolated from human brain. The researchers went on to challenge these new residents with oligomeric amyloid beta, discovering key differences with the response from endogenous mouse microglia.

Since posting the paper to BioRχiv last February, a parallel study from the lab of Mathew Blurton-Jones at the University of California, Irvine, has showed similar findings supporting the results achieved (read more in this Alzforum summary). We spoke to co-lead author Dr Renzo Mancuso from the group at VIB Leuven to find out more about the significance and potential of this development.

What was the hardest step to overcome in successfully transplanting the human microglia?

Perhaps the fact that we were trying to develop this whole new model from scratch, for the first time. Even if we had a good idea and substantial theoretical basis, we had to learn step-by-step across the whole process. Having said that, this made it very challenging and exciting – it was awesome to see how beautiful transplanted human microglia looked for the first time ever!

How do you think this model will change and improve research?

I think this is currently unique to study specific human aspects of microglia biology that are missing from rodent models, especially taking into account that the immune system is probably subjected to the highest evolutionary pressure. Within the Alzheimer’s disease context, it will allow us to decipher genotype-phenotype interactions resulting from specific genetic variants or mutations that increase the risk for developing disease. Unlike in vitro models, it also allows us to model multicellular interactions and study how microglial activation occurs and shapes the complex cellular phase in Alzheimer’s disease.

What were the main findings when you challenged the transplanted human microglia with oligomeric amyloid beta?

Firstly, human microglia transplanted in the mouse brain were able to integrate and develop a response when exposed to an exogenous challenge of oligomeric amyloid beta, and secondly, that response was very different from the one displayed by endogenous mouse microglia. We should be cautious as this is a proof-of-concept model but it is interesting data to acquire at these early stages.

Do you think a similar method could be used to transplant other human cells types?

Absolutely! This is happening in the lab right now, where we are transplanting neurons, astrocytes and microglia. We have not tried yet with co-transplantation but it is certainly a possibility in the future.

What are the limitations of the model and what improvements could be made?

I would say that this particular protocol had only a limited grafting efficiency (i.e. percentage of replacement of mouse by human microglia (max 14%)), but we have been improving our protocols since then and now obtain robust forebrain engraftment with up to 60% efficiency.

Is this model easy to implement for other lab groups?

The multidisciplinary nature of the study is another limitation. It required multiple fields of expertise: microglial biology, Alzheimer’s disease, induced pluripotent stem cells and single cell RNA sequencing, as well as mouse experiments and strong bioinformatics. Many resources were also required to make it possible, in our case thanks to a vast network of collaborations with other institutes in KU Leuven and VIB core facilities. It’s not impossible for single groups to implement but this a great example of what collaboration can bring to science.

What are your next steps for utilising the model?

We are now evaluating the response of human microglia to amyloid beta plaques in order to compare previous data from rodents, with the overall aim of identifying pathways that may be suitable therapeutic targets. We will also introduce mutations in the human cells based on genetic studies, analyse how that modifies the response of microglia and observe the effect on disease progression in the mouse.