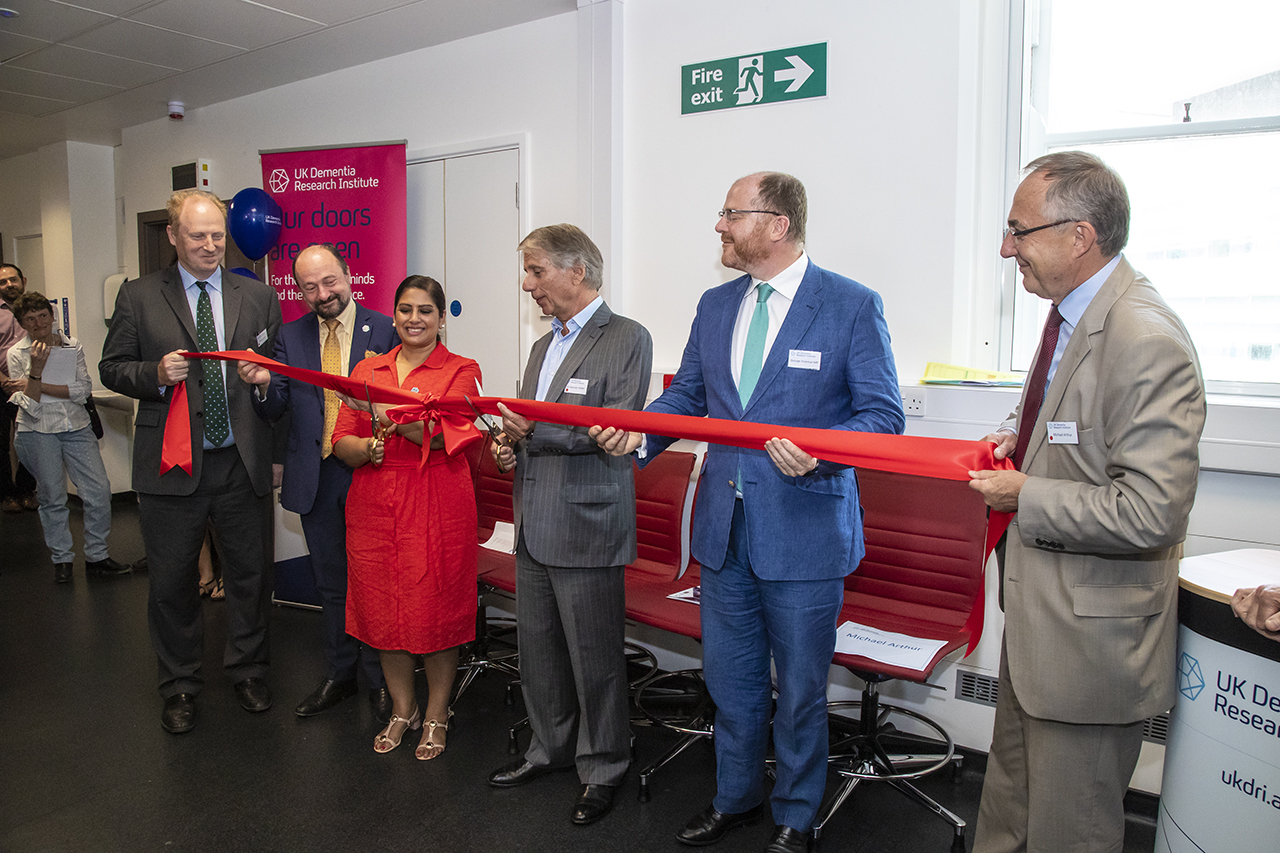 “This is the beginning of the end for dementia,” announced Prof Nick Fox, as we officially opened the hub of the institute at UCL, on 19 July 2018. It simply wouldn’t be possible without the unique partnership between the MRC, Alzheimer’s Society and Alzheimer’s Research UK.

The UK DRI has been set up to find scientific solutions to one of society’s biggest health challenges: over 1 million people are expected to have dementia in the UK by 2025. Having our research underway in remarkable new facilities is a huge leap forwards in bringing promise to the millions of people who are affected by dementia.

Following the selection of UCL to host the research hub in December 2016, it’s been a busy time behind the scenes to refurbish new labs and recruit new programme leaders. At our launch event, we were thrilled to gather our funders and key individuals who made it all happen, to say a big ‘thank you’ and look ahead to the future.

Adrian Ivinson, UK DRI Director (Operations), welcomed guests into our most recently finished labs – these empty benches will soon be filled by our new international recruits making discoveries. We were privileged to hear words of inspiration and hope from many of the people who have been on the journey to establish the UK DRI.

Opening the interim home of the UK DRI feels like we are on the precipice of something really exciting. These new labs have been designed for the specific needs of the scientists who will work here. Michael Arthur, UCL Provost

As trustees, we are here to let you get on with the science. We look forward to helping the institute go from strength to strength. Be ambitious – be a global centre. William Rucker, UK DRI Chairman

We have a huge knowledge gap in dementia – our mission at the UK DRI is to fill that gap. I see our UCL hub as part of a virtual UK DRI building – each of our centres nationally are a different floor and we work closely together to tackle neurodegenerative diseases. Bart De Strooper, UK DRI Director

We have no other choice: we can, will and must find treatments. We will look back at today and see this as the start of a change. Nick Fox, Associate Director, UK DRI at UCL

In the spirit of collaboration, our speakers held the ribbon together whilst two very special guests performed the cutting to mark the celebratory occasion.

Shaheen Larrieux, who cares for her mother who is living with bvFTD, has been involved with the UK DRI from the beginning: she sat on the advisory panel for the appointment of the Director and has since been a great ambassador, including representing the UK DRI in the Parliament.

Shaheen said, “In my lifetime, I want to see the UK DRI find treatments, so people like me don’t have to go through as much heartbreak.”

Sir Malcolm Walker, CEO of Iceland Foods Limited, has been a major supporter of dementia research at UCL and has given £10M to support the development of the UK DRI at UCL. 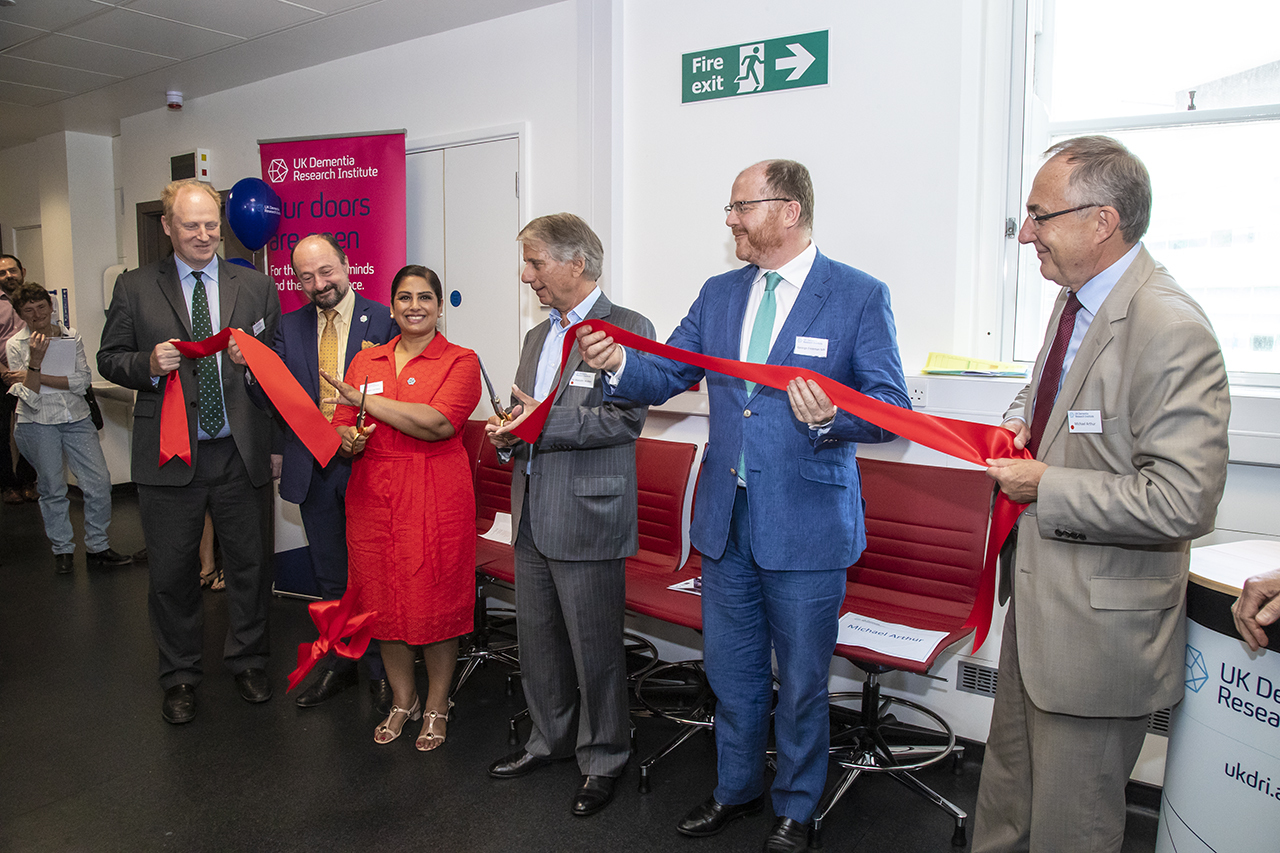 Following the official ceremony, guests had the opportunity to visit our labs and see our researchers at work, as well as see real brain tissue from the UCL Queen Square Brain Bank, who the UK DRI will work with closely. 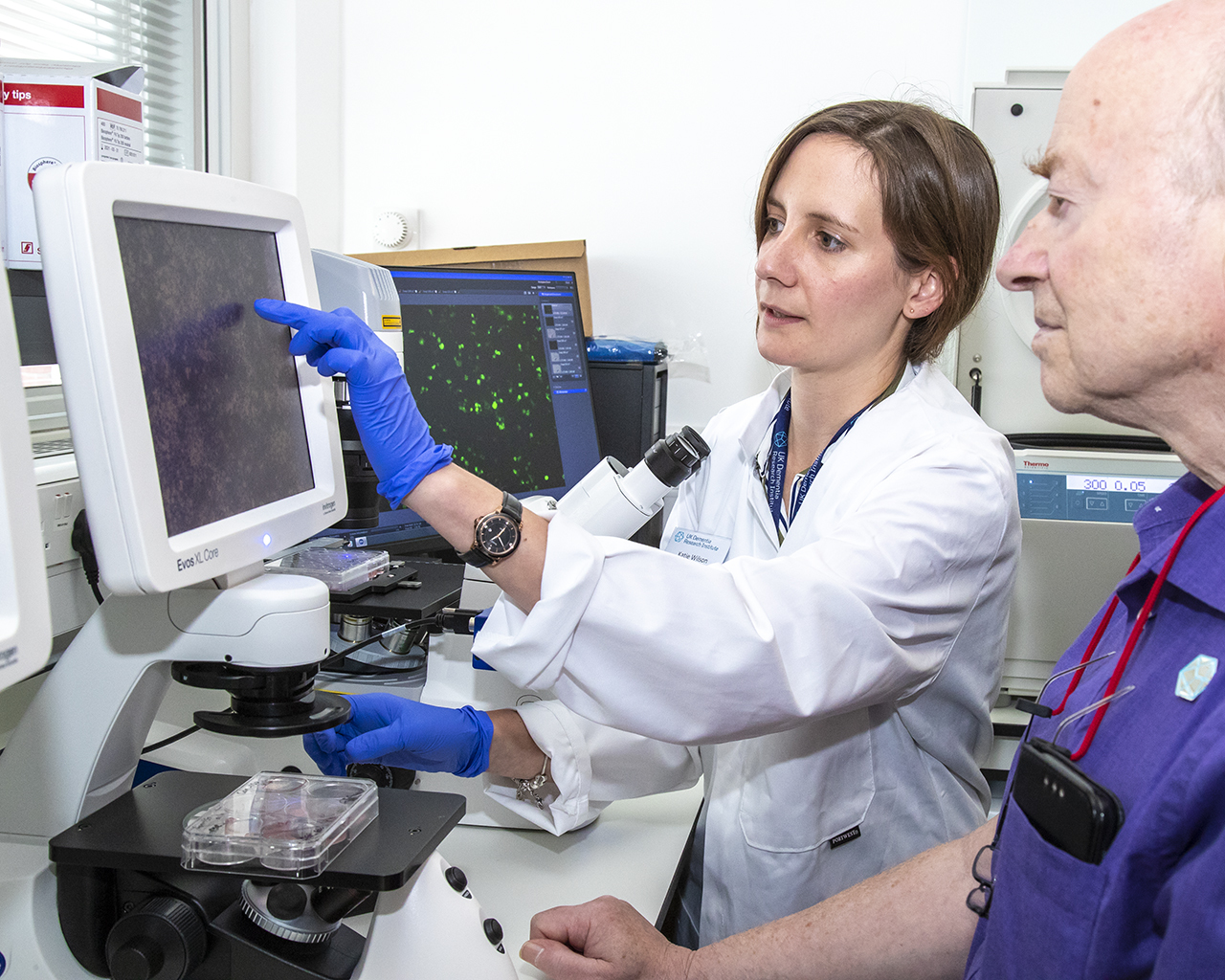 shows stem cells under the microscope 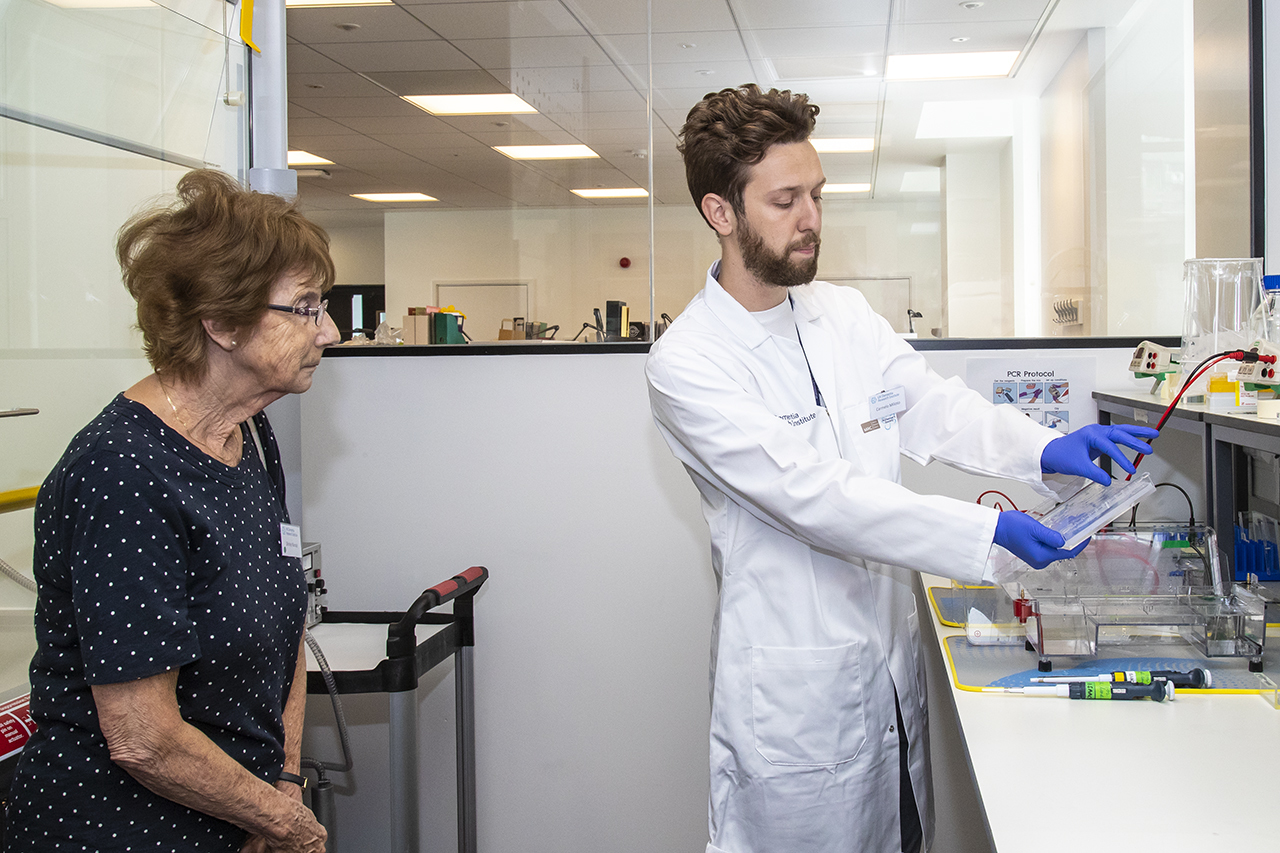 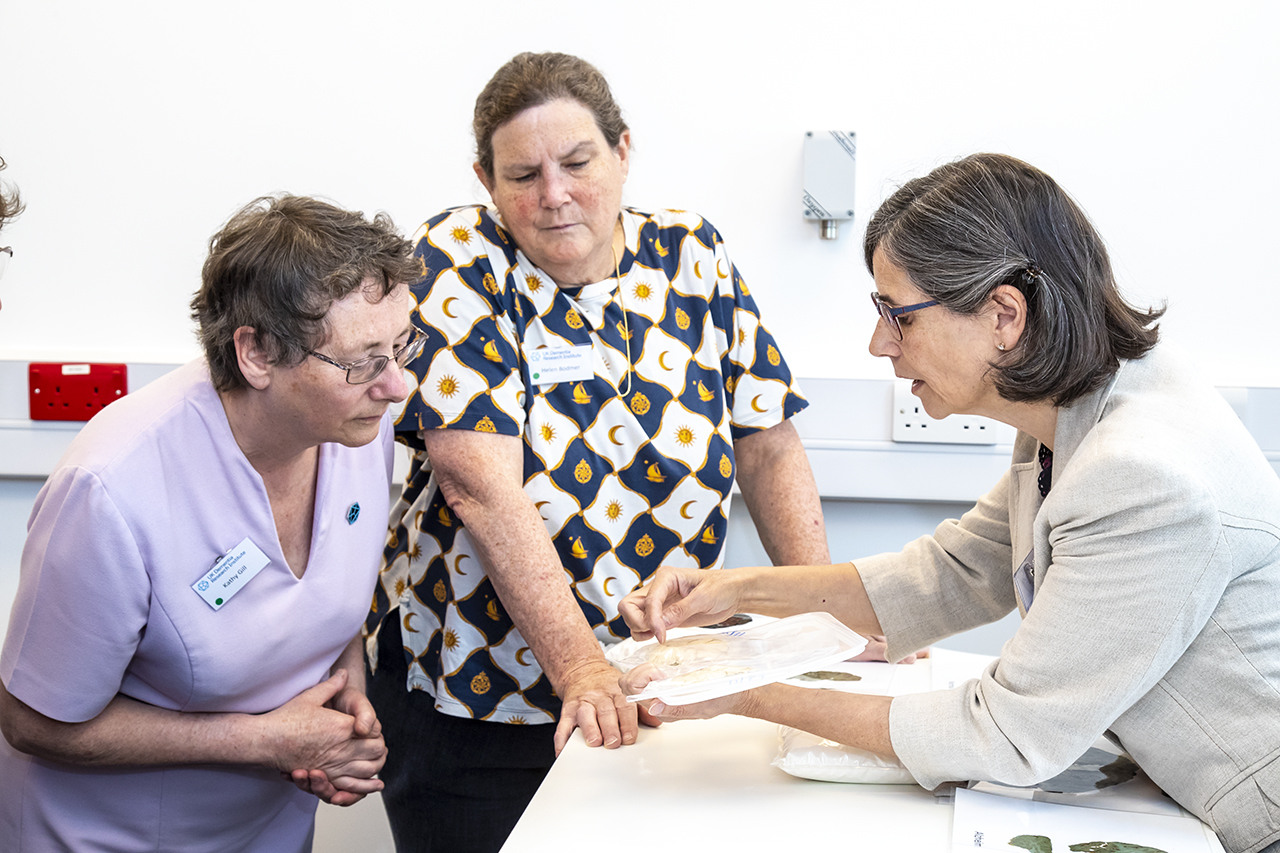 At the UK DRI at UCL, we have twelve large programmes underway, with three new international recruits joining this autumn, and more recruitment underway. By bringing together a critical mass of experts from different fields, we will make a seismic shift in our understanding of all dementias and how to tackle them.