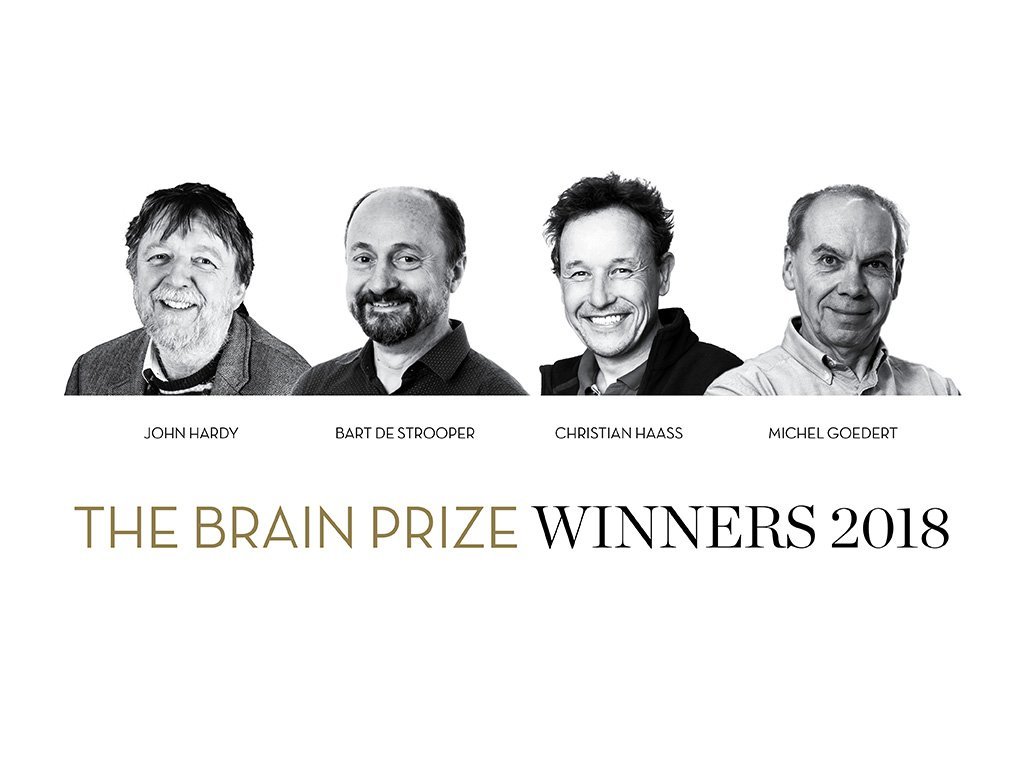 We’re over the moon that UK DRI Director Bart De Strooper and UK DRI Professor John Hardy have been awarded the world’s most valuable prize for brain research, worth one million euros. They receive the prize alongside Michel Goedert and Christian Haass for their combined groundbreaking research on the genetic and molecular basis of Alzheimer’s disease.

The Brain Prize, awarded by the Lundbeck Foundation in Denmark annually, recognises one or more international scientists who have distinguished themselves by an outstanding contribution to neuroscience.  The research pioneered by these four European scientists has revolutionised our understanding of the changes in the brain that lead to Alzheimer´s disease and related dementias.

We’re so proud that not one but two leaders at UK DRI at UCL have been awarded this prestigious prize! Let’s take a closer look at their work that led to this recognition…

Discoveries: Professor De Strooper discovered that the protein presenilin ‘cuts’ other proteins into smaller pieces which is an important and complex process in normal cell-to-cell communication. Mutations in the presenilin genes cause Alzheimer’s disease. He found that these mutations lead to the production of abnormal amyloid which is the main constituent of the plaques in the brains of patients with Alzheimer’s disease. He has deciphered in great detail what the mutations are doing and how they drive the disease process. Working with transgenic animals, zebra fish and human brain tissue donated by patients, Professor De Strooper applies information from genetic studies of Alzheimer’s and Parkinson’s disease for theories of the cellular basis of dementia to identify new drugs.

“Treating amyloid very early on could provide protection against the symptoms of Alzheimer’s in later life.” said Professor De Strooper.

The Brain Prize recognises that basic science makes a real contribution, even though much of it cannot be directly applied to clinical care. The Prize is an important sign for young scientists to know that they can still make big discoveries, and that we urgently need them to pursue research into diseases of the ageing brain. Bart De Strooper, UK DRI Director

Discoveries: After finding mutations in the gene for the amyloid protein in a family with early onset disease, Professor Hardy proposed a ground-breaking ‘amyloid hypothesis’ for Alzheimer’s disease suggesting that disease was initiated by the build-up of this protein in the brain. The disease progresses when there is an imbalance in the production and the clearance of amyloid. His discoveries of genetic mutations have had a dramatic impact on understanding not only Alzheimer’s disease but more recently in other neurodegenerative diseases including Parkinson’s disease, progressive supranuclear palsy and motor neuron disease. With his collaborators, their development of transgenic mice that mimic these diseases process has provided the foundation of clinical trials for drugs to treat these complex diseases.

“Collaborating with clinicians, geneticists and cell biologists is work in progress. Although we have not found a successful treatment yet, I believe we are on the way towards rational, mechanism-based treatments,” said Professor Hardy.

His work on Alzheimer’s disease, other dementias and Parkinson’s disease is amongst the most highly cited in neuroscience.

In the early 1980s, research into Alzheimer’s disease was a real backwater. The first conference only attracted 40 people, but now thousands attend. The pace of knowledge is very fast and the quality of science is excellent. Finding out about the interactions of the different types of cells in the brain is fundamental to our understanding of how the brain works. Professor John Hardy, UK DRI at UCL

The chairman of the Lundbeck Foundation Brain Prize selection committee, Professor Anders Bjorklund, said, “Alzheimer´s disease is one of the most devastating diseases of our time and the remarkable progress that has been made during the last decades. These four outstanding European scientists have been rewarded for their fundamental discoveries unravelling molecular and genetic causes of the disease that have provided a basis for the current attempts to diagnose, treat and possibly even prevent neurodegenerative brain diseases. The award recognises that there is more to Alzheimer´s disease than amyloid, and that the field of dementia research is more than Alzheimer´s disease alone.”