Tearing Down Dementia: the UK DRI at King’s officially opens its doors 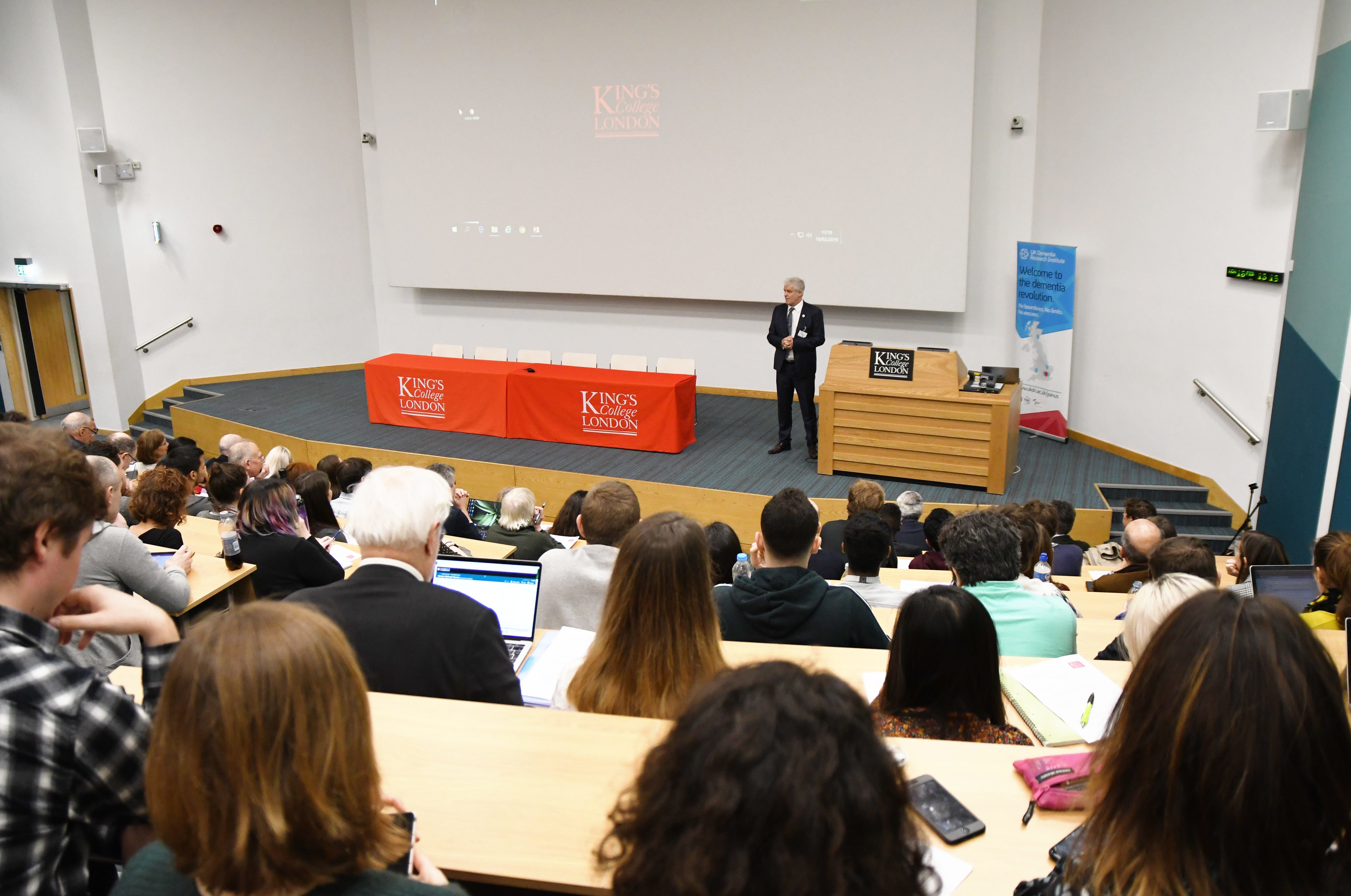 The centre also held a celebration of the UK DRI at King's researchers' commitment to ending dementia. This celebration included a talk on the importance of diversity in research along with an interactive session which gave attendees to opportunity literally “tear down dementia” to reveal some incredible art that captures the goals of the centre to find treatments for dementia. 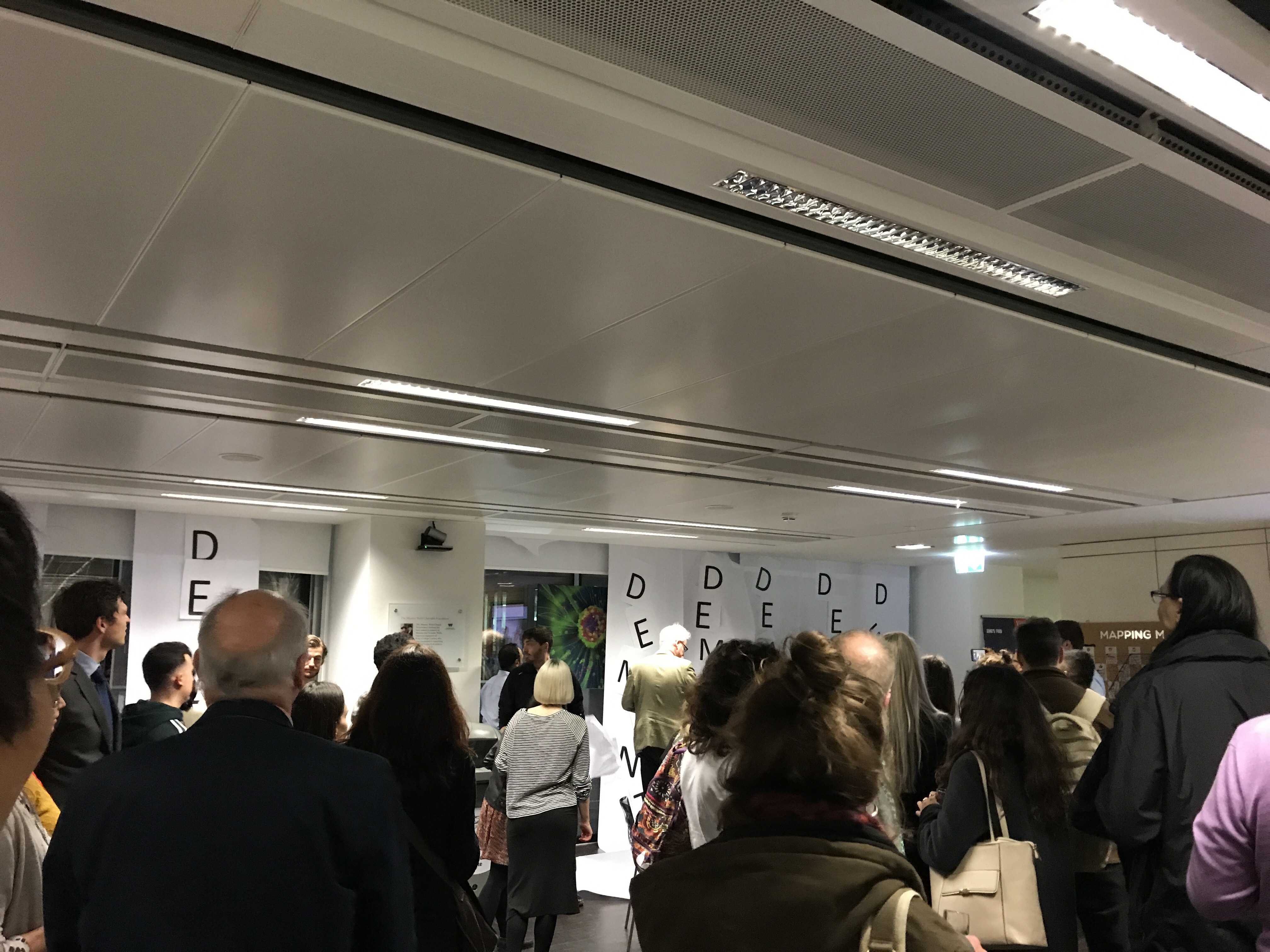 from the walls at the reception

The best thing about being part of the UK DRI is that we get to work with the most extraordinary minds, to tackle the most terrible diseases. Prof Chris Shaw, Associate Director, UK DRI at Kings.

The UK DRI at Kings College London is based in the Maurice Wohl Clinical Neuroscience Institute on the Denmark Hill Campus, and draws on King’s strengths in immunology and developmental neuroscience to explore the contribution of brain inflammation to neurodegenerative diseases. Led by Professor Chris Shaw, the institute is mapping out the earliest changes in the brain associated with frontotemporal dementia (FTD) and amyotrophic lateral sclerosis (ALS) in cellular and animal models and in people to gain a much deeper understanding of the causes of these conditions. The aim is that data arising from this research will then be used to design early-stage diagnostics and to develop therapeutics for effective cure.

It’s fantastic that the UK DRI at Kings has both discovery research and translational research under one roof. By focusing on ALS, FTD and Alzheimer’s disease to understand the mechanisms of these diseases, they bring a unique and valuable insight to the institute. We can see fresh thinking and skills from its new recruits and we look forward to seeing exciting discoveries over the coming years. Congratulations to Chris Shaw and his team on today’s official launch! Prof Bart De Strooper, UK DRI Director

A closer look at the launch symposium:

Mutations in RNA binding proteins (RBPs) as well as their aggregation are a common feature of neurodegeneration. Talks covered several aspects of RNA metabolism in neurodegeneration including a newly identified RBP involved in Amyotrophic Lateral Sclerosis, the consequences of disease causing mutations on the molecular and organism level, and how RNA could be used to prevent the aggregation of mutated RBPs.

Microglia are emerging as key players in neurodegenerative diseases such as Alzheimer’s disease. Thus far, microglia have rather been known as modulator of neurodegeneration with functions limited to neuroinflammation and release of neurotoxic molecules. However, several recent studies have demonstrated a direct role of microglia in “neuro”degeneration by promoting phagocytosis of neuronal, in particular, synaptic structures. Speakers shared advances in the field.

Advanced imaging in neurodegeneration: This session showcased the strength of the KCL dementia research community in advanced imaging technologies, showing how they can reveal mechanistic insight from single molecules to in vivo models and patient tissue.

Alzheimer’s disease (AD) is the leading cause of dementia. The pathophysiology of AD involves the weakening of synaptic connections and ultimately their elimination, which is thought to correlate with disease progression and severity. This session discussed how synapse loss in disease is underpinned by the aberrant activation of synapse weakening signalling cascades.