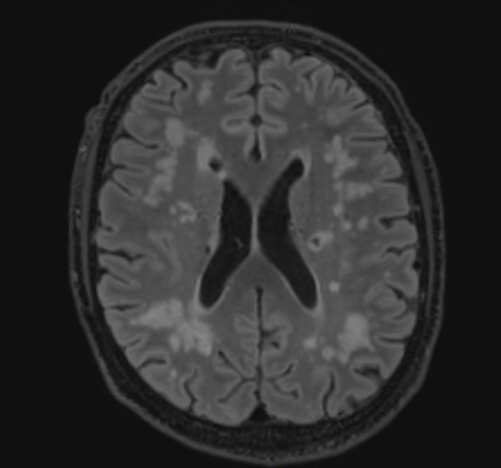 A new systematic review and meta-analysis of 81 studies investigating neuropsychiatric symptoms in cerebral small vessel disease, suggests that apathy, fatigue, and delirium are associated with more severe disease. Researchers hope that these subtle symptoms could be used to screen individuals at high risk of developing the disease.

Cerebral small vessel disease is a disorder where blood vessels in the brain become damaged and cause injury to surrounding brain tissue. The condition is a common cause of vascular dementia, the second most common form of dementia, but is often considered clinically ‘silent’ before dementia or stroke become apparent. Small vessel disease is easily identifiable on brain scans, even before people develop dementia or stroke.

To determine whether symptoms could be detected at these earliest stages of disease, before the brain becomes severely damaged, a team of researchers and clinicians from the UK DRI at Edinburgh performed a systematic review and meta-analysis of previous studies in this area. Led by Prof Joanna Wardlaw CBE, the team examined 81 studies, which included data from approximately 22,000 participants.

The findings, published today in the scientific journal Lancet Psychiatry, suggest that there are small but important associations between the symptoms of apathy, fatigue, and delirium and having more severe small vessel disease on brain scans. This information could be used to identify high-risk groups in clinical settings.

"This important study shows that there are subtle symptoms related to having worse cerebral small vessel disease which, combined with other factors, could help to recognise the disorder earlier before brain damage gets worse. Early detection is likely to be very important for future dementia prevention and treatment."

In contrast to the three symptoms identified - apathy, fatigue, and delirium - the team found that subjective cognitive complaints were not necessarily associated with more severe small vessel disease, providing some reassurance to concerned individuals. For other neuropsychiatric symptoms such as anxiety, delusions, and emotional lability, there was insufficient evidence to suggest an association, but Prof Wardlaw stressed the need for further investigation.