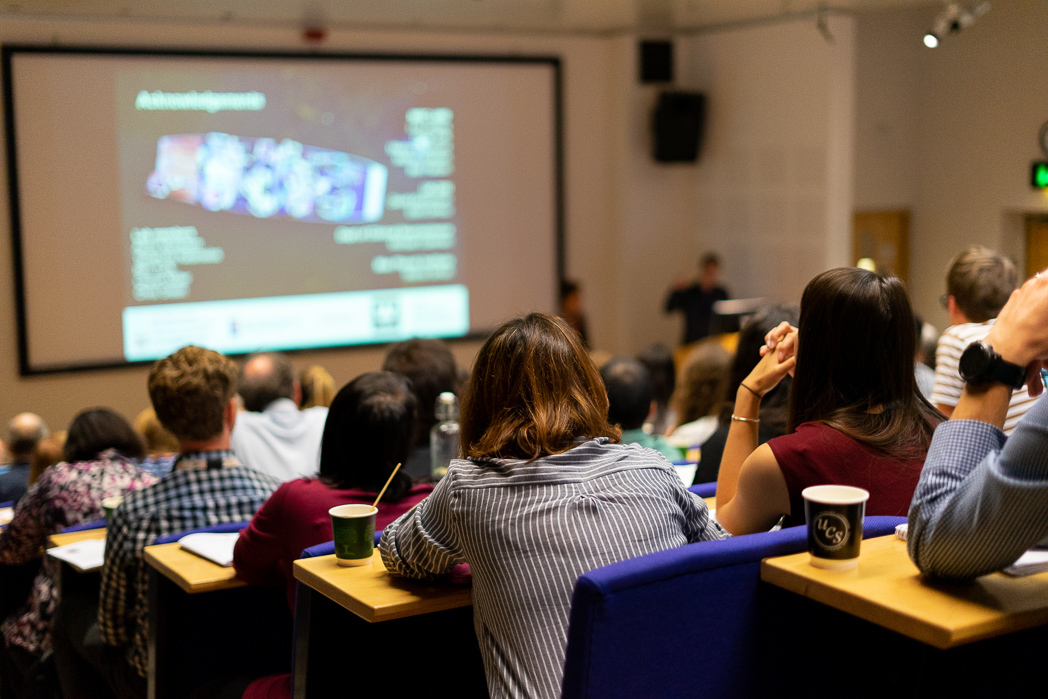 Over 180 researchers, clinicians and students gathered last month (23 September) for the official opening of the UK DRI centre at the University of Cambridge. Led by eminent professor, Giovanna Mallucci, the centre’s focus will be on deciphering why neurons degenerate in dementia and translating that to therapeutics targeting the earliest stages of disease. Attendees at the launch enjoyed talks from the seven Group Leaders at the UK DRI at Cambridge, close collaborator Prof Clemens Kaminski and a guest keynote lecture from Prof Bradley Hyman.

With this official event marking a milestone, Prof Mallucci’s opening words reflected on how the establishment of the centre in Cambridge had already opened doors with researchers across the university, the wider UK DRI institute and internationally – even attracting over £15M external funding in these early stages. With the enormous challenge of dementia in the UK, Giovanna identified that a change in approach was needed with new funding driving new understanding and crucially, new treatments. This will be facilitated by the recent establishment of the Gnodde Goldman Sachs Translational Neuroscience Unit at Cambridge, to accelerate studies into humans.

If we look across the spectrum of diseases that cause dementia, we find unique signatures that mark each one out and provide foundations for the varying phenotypes and symptoms experienced in the disorders. However, there are several features shared across these devastating conditions and, as Giovanna explained, building understanding of these commonalities will be the focus of UK DRI at Cambridge. Specifically, the team of Group Leaders have been assembled to uncover mechanisms behind the progressive loss of synapses and accumulation of misfolded proteins – key characteristics of most neurodegenerative disease - with the hope that targeting novel pathways here, and early in pathogenesis, may slow or halt associated diseases.

The ambitious vision of UK DRI has attracted leading research groups to join the institute, and bringing fresh thinking and ideas will be critical in the search for effective therapeutics for dementia. Joining Giovanna, world-leading researchers Sir David Klenerman and David Rubinsztein will provide mentorship for bright new talent Edward Avezov, Emmanouil Metzakopian, Gabriel Balmus and Will McEwan.

The introductory speech ended on a poignant note with Giovanna dedicating the day to close friend Sir Chris Dobson, who sadly passed away on the 8 September. Chris held the John Humphrey Plummer Professorship of Chemical and Structural Biology in the Department of Chemistry and was a pioneer in protein misfolding, co-founding the Department’s Centre for Misfolding Diseases in 2013.

Attendees at the event 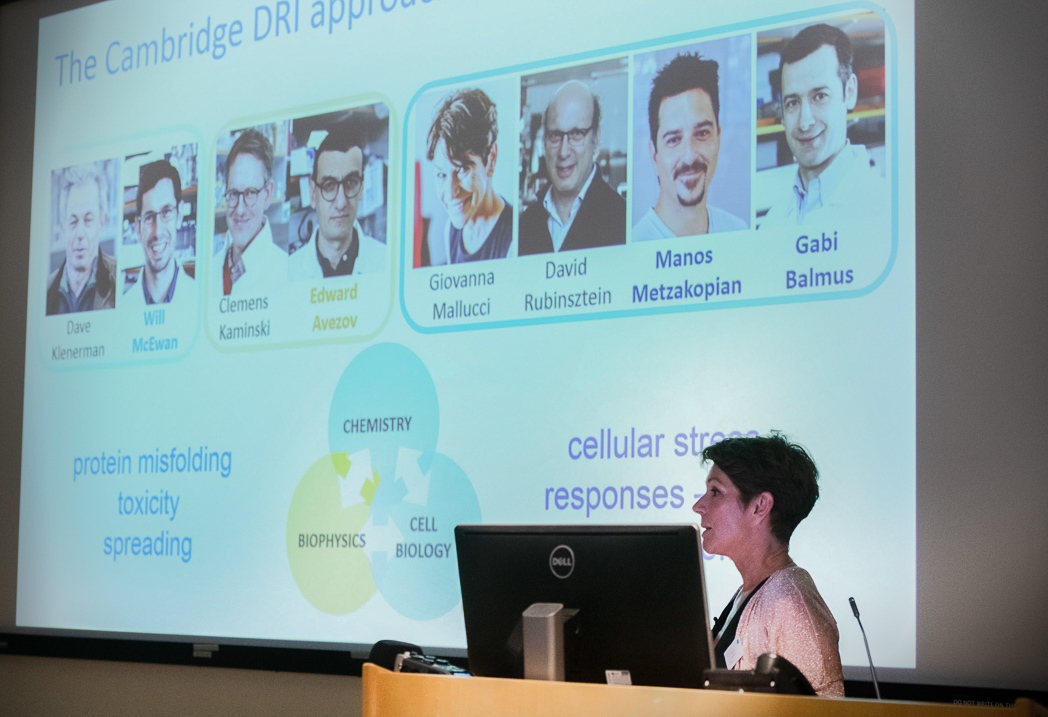 The day’s scientific programme had been arranged around two topics areas at the heart of the centre. On the theme of cellular stress, Giovanna began outlining how it had been assumed that misfolded proteins themselves were toxic, however, unsuccessful therapeutic trials suggested otherwise, with focus now shifting to the processes and mechanisms behind the misfolding.

Giovanna herself has previously shown that early neurodegeneration can be halted in animal models of prion disease, by targeting the reduced protein synthesis observed in disease. Keen to translate these findings, Giovanna and collaborators have identified promising drug candidates for clinical trials and developed a pioneering new imaging protocol to evaluate protein synthesis rates in humans.

Disrupted autophagy in neurodegenerative disease is similar to a rubbish truck stuck in traffic - the toxic waste builds-up and is damaging to the environment. Prof David Rubinsztein, UK DRI at Cambridge

Next, Prof David Rubinsztein discussed the negative consequences of disrupted autophagy and the build-up of toxic cellular waste in neurons. His group recently reported that Felodipine was found to induce autophagy, clearing mutant α-synuclein in mouse brains and offering hope for neuroprotective intervention. 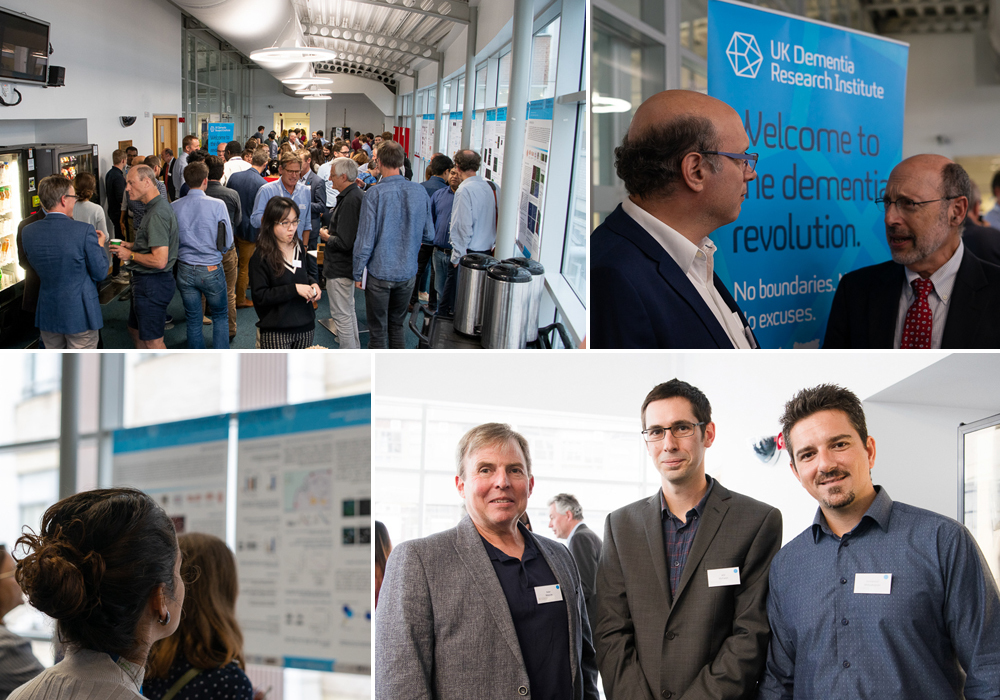 The second stream of work from the centre aims to decipher mechanisms behind the misfolding of proteins and find ways to prevent this in neurodegenerative disease. Many of the groups are utilising super resolution light microscopy to see these processes in more detail than ever before.

Prof David Klennerman is using the technology to study the make-up of protein aggregates in disease, particularly in cerebrospinal fluid samples from patients. This will aid more accurate diagnosis and build a better understanding of seeding and toxicity. Furthermore, Prof Clemens Kaminski harnesses single molecule imaging to examine templated amyloid misfolding. He is working closely with Prof Mallucci to image protein synthesis in neurons and has found fascinating relationships between lysosomes and the endoplasmic reticulum (ER), with dysfunction causing issues in this cellular network. Dr Edward Avezov’s Lab is also investigating the ER with the recent discovery of active flow in this organelle. By manipulating disease-associated genes, Edward aims to determine whether disruption in this process may explain vulnerability in certain populations of neurons.

The recent recruitment of Dr Will McEwan to the Cambridge centre is an example of how the UK DRI is aiming to bring expertise and talent from other fields to fight dementia. Will trained as a viral immunologist and during his postdoctoral studies, co-discovered and characterised a novel antibody receptor, TRIM21. He hypothesises that this intracellular receptor, which usually recognises and degrades viruses in the proteasome, could be harnessed to remove misfolded protein aggregates in neurodegenerative disease.

The guest keynote of the afternoon was delivered by Prof Bradley Hyman from Harvard Medical School. His talk centred around heterogeneity in Alzheimer’s disease, himself describing it as a common syndrome with multiple pathways which may explain the difficulty we have had in finding therapeutics. A graph showing patient cognitive trajectories highlighted the huge diversity in disease progression and Prof Hyman believed better understanding of genes and genetic therapy utilisation will be key for the field.

It was great to hear the range of science underway during the official opening of the UK DRI at Cambridge. Prof Mallucci has recruited an impressive team of researchers to drill down into early stage dysfunction in neurodegenerative disease, focusing on two specialist areas in synapse loss and protein misfolding. The mix of proven, established professors with dynamic new talent will bring fresh ideas to the field and the relationships already built with clinical teams, should ensure translation remains paramount to the ethos of the centre. 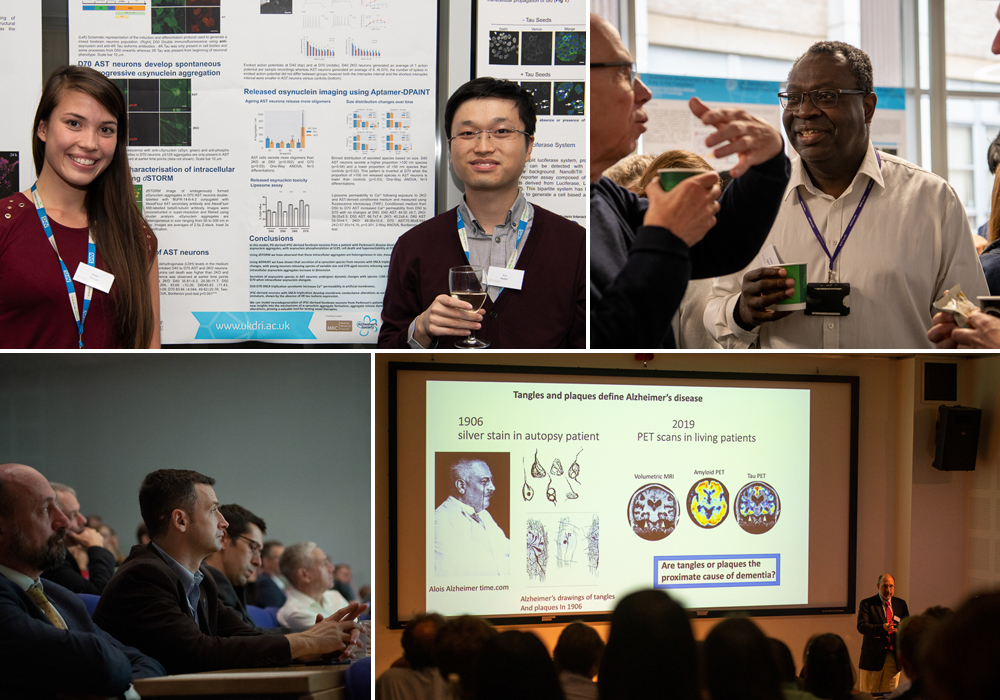 Photo Gallery from the day